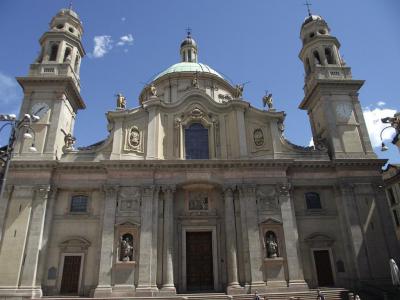 The Church of Sant'Alessandro in Zebedia, built in 1589, is a Baroque style church with two lateral bell towers. One functions as a clock whilst the other has been a belfry since 1643. The church comprises of a principal building on the Greek cross plan with a central dome.

Built by Barnabite monks in the 9th century, the church has a centralized plan with a cupola that serves as a presbytery. The interior is decorated with precious paintings in the Lombard tradition of the 17th and 18th centuries. Federico Borromeo laid the foundation stone in 1602. The design was done by Lorenzo Birago and the church was built on an area where there was once an antique oratory dedicated to Saint Pancras. Saint Zebedia prison was also present there in which, it is thought, martyr Alessandro was held.

There is a lobby with wooden insets in front of the entrance of the church. It leads to the church through one of the two existing doors: three naves separated by large pillars and buttress. The central area is lined with benches for the faithful. Baptismal font is also present along with a harmonium and a beautiful, sacred image of the Virgin Mary.

Platform is embedded with precious stones. The whole altar structure is in green marble and covered with precious gems. The walls of the presbytery are decorated by six paintings which date back to 1687 and show scenes from the Saint's life. There are thirteen confessionals present in this monumental church, two of which are made of walnut and have marble insets.

Milanese families donated generously to the building of the church and obtained patronage of many chapels. The remains of Saint Alexander are also preserved in this chapel.

It is a peaceful and relaxing place which takes one away from the hustle and bustle of city life. Your visit to this church will take you to a journey of heavenly bliss.
Image by Giovanni Dall'Orto on Wikimedia under Creative Commons License.
Sight description based on wikipedia