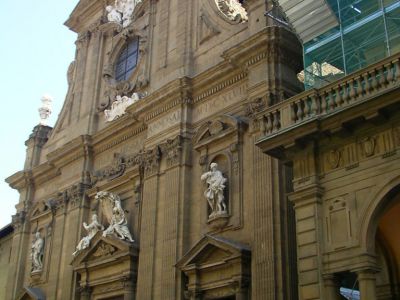 The Theatine order, formed as a result of Counterreformation, took over an eleventh century church dedicated to St. Michael in 1592. Financially supported by the eminent families of Florence, the Theatine order commenced the construction of the Church in 1604 with the design of Bernardo Buontalenti. The construction was completed in 1648, by which a number of architects were involved in the project, each making variations to the original design.

Built of the site of a Romanesque Church, the church was dedicated to San Gaetano (Saint Cajetan). Since, the previous church on the site was dedicated to St. Michael, the new building was named Church of Santi Michele e Gaetano. Matteo Nigheti and Gherardo Silvani share the credits for the way the church stands today. In a city dominated by Renaissance styled architecture, this Church on Piazza Antinori has a distinct Baroque style. The façade is decorated with sculptures, which one does not see in Renaissance style of architecture.

The Church houses Matteo Rosselli’s Chapel of the Nativity and Pietro da Cortona’s Martyrdom of San Lorenzo. The Medici family took personal interest in the work of the church. While, Grand Duke Ferdinando I financed the intial stages of work, his son and Cardinal, Carlo de Medici was concerned about the work. If you would like a break from the Renaissance style, you must visit this Church for its unique Baroque style.
Image by Sailko on Wikimedia under Creative Commons License.
Sight description based on wikipedia