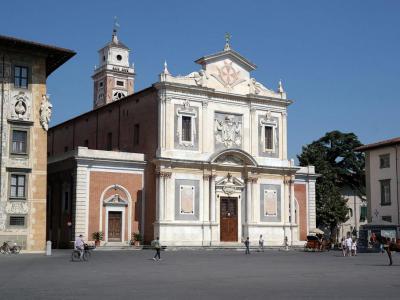 The interior of the church features many banners won by the Order in their endless wars against Saracen pirates in the Mediterranean Sea. The main altar was built by Silvani, behind which a marvelous statue representing San Stefano as Pope with representations of Faith and Religion, sculpted in 1709 by Foggini. The wooden ceiling was placed in 1604 and has six painted panels depicting historic events of the Order. These panels were painted by Allori, il Cigoli, Ligozzi, and l’Empoli. The pulpit was built by Fancelli in 1627 and is decorated with paintings by Lomi. There are five monochrome paintings executed in 1588 showing stories of San Stefano, Pope and Martyr. The font was designed by Vasari and built by Fancelli in 1568. The Chapel of the Holy Sacrament was added in 1837 by Galli.
Image by Sailko on Wikimedia under Creative Commons License.