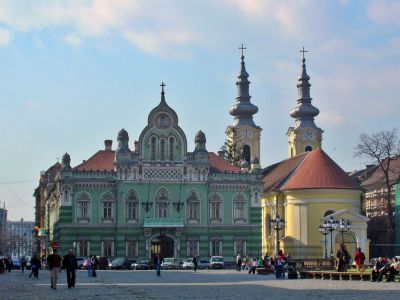 The Serbian Orthodox Cathedral, dedicated to St. Nicholas, is situated in Piata Unirii in Timisoara. Next to this place of worship is located the Serbian Orthodox Vicariate, which finds itself in an amazing building decorated in the Baroque style, dating back to the 18th century. By the mid-nineteenth century, the religious edifice was used by the Orthodox community in the city, by both Serb and Romanian ethnicity, but after the separation of the two churches, the Serbian Church from Piata Unirii remained in the possession of the Serb community. Since 1964 the church is declared a historical monument.
Image by Voytek S on Wikimedia under Creative Commons License.

Architecture in Timisoara, Part I