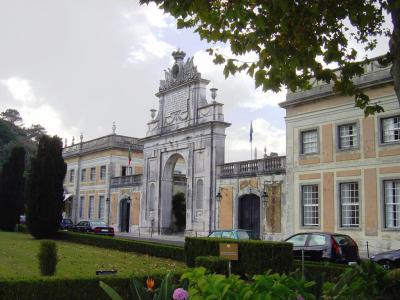 In 1797, some years after the consul's death, his widow sold the palace to Diogo José Vito de Menezes Noronha Coutinho, 5th Marquis of Marialva. The palace was enlarged between 1801 and 1802, probably by neoclassical architect José da Costa e Silva. The palace was turned into a symmetrical U-shaped building, with the consul's house becoming one of its wings. The cornice of the buildings that compose the main façade was decorated with typical neoclassical motifs like vases, busts and reliefs of garlands. The gardens of the palace were remodelled following romantic trends.

This sight is featured in a self-guided walking tour of Sintra, Portugal within the mobile app "GPSmyCity: Walks in 1K+ Cities" which can be downloaded from iTunes App Store or Google Play. Please download the app to your mobile phone or tablet for travel directions for visiting this sight. The app turns your mobile device to a personal tour guide and it works offline, so no data plan is needed when traveling abroad.

Sintra boasts diverse architecture, combining such styles as Romanesque, Gothic, Neoclassical, Renaissance and (typical for Portugal) Manueline. The city’s wonderful religious buildings date back to the Middle Ages and are still well-preserved. Palaces and castles never fail to impress visitors with their grandiosity and magnificent scenery of the city from the hills on which they stand. Take...  view more