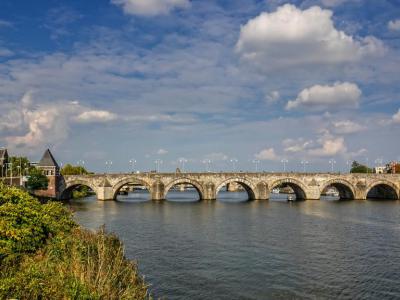 Sint Servaasbrug is an arched stone footbridge across the Meuse River in Maastricht. It is named after Saint Servatius, the first bishop of Maastricht, and (despite being largely rebuilt after World War II) it has been called the oldest bridge in the Netherlands. The Sint Servaasbrug connects pedestrian traffic from the Binnenstad district of Maastricht on the west bank of the Meuse to the Wyck district on the east bank.

The bridge is made of limestone, and in its current configuration it is 160 metres (525 ft) long and 9 metres (30 ft) wide. Its seven arches each span approximately 12 metres (39 ft), and are supported by seven piers. A separate steel draw bridge with a span of 54.5 metres (178 ft 10 in) connects the east end of the bridge to the east bank of the river.
Image by Saturn V on Wikimedia under Creative Commons License.
Sight description based on wikipedia

Want to visit this sight? Check out these Self-Guided Walking Tours in Maastricht. Alternatively, you can download the mobile app "GPSmyCity: Walks in 1K+ Cities" from iTunes App Store or Google Play. The app turns your mobile device to a personal tour guide and it works offline, so no data plan is needed when traveling abroad.