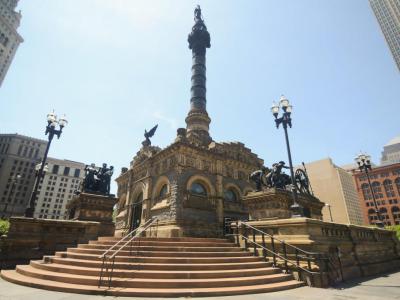 The Cuyahoga County Soldiers' and Sailors' Monument is dedicated to Civil War soldiers and sailors. Located in the southeast quadrant of Public Square in downtown Cleveland, it was designed by architect Levi Scofield (1842–1917), who also created its sculptures. Opened in 1894, it consists of a 125-foot marble shaft erected on a dark granite and stone base, which houses a memorial building. The shaft is topped with a bronze statue of the Goddess of Liberty. Four bronze groupings at its base depict the four branches of the Union Army: the Navy, Cavalry, Infantry and Artillery. Inside the memorial building is a series of bronze tablets listing 9,000 Civil War veterans who served with Cuyahoga County regiments or were from Cuyahoga County. Also inside the base are four bronze relief sculptures depicting the Soldiers' Aid Society, Emancipation of the Slaves, Beginning of the War in Ohio and the End of the War.