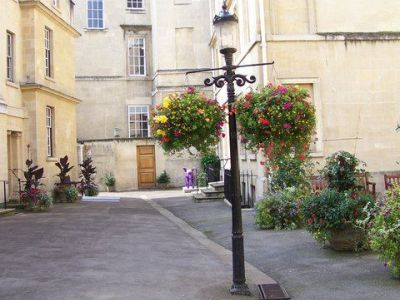 St John’s Hospital is one of Bath’s lesser known attractions, yet it has a history that is much longer than some of the city’s great Georgian jewels. Located in the maze of alleyways and courtyards around Bath’s main shopping streets, St John’s Hospital has held a presence in the city since 1180. In the present day, the hospital is in fact a collection of alms houses – neat, compact dwellings designed to house the elderly and infirm in comfort. St. John’s Hospital Trust has provided care to the vulnerable amongst Bath’s population since the original hospital’s formation, some 800 years ago.

St John’s Hospital was originally built adjacent to the Bath Cross hot springs, to take advantage of the alleged restorative powers of the local water. The alms houses that make up St John’s Hospital are now contained within a large two storey Georgian block, having been rebuilt in 1716 by architect William Killigrew. Now a Grade I listed building, the houses continue to be occupied by elderly local residents. Situated in a quiet courtyard, St John’s Hospital can easily be taken in as part of a tour of Bath’s historic centre, lying midway between the abbey and the Theatre Royal on either side of the city centre.
Image by Trish Steel on Wikimedia under Creative Commons License.