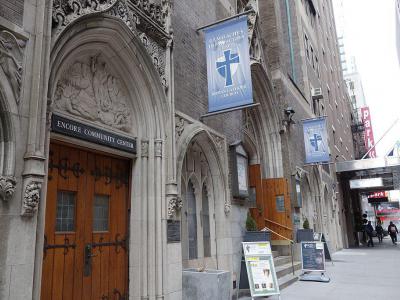 Mere footsteps from Times Square, St Malachy’s church is nestled among the theaters of Broadway and, if you don’t keep your eyes open, you’ll miss it easily – overshadowed by soaring buildings all around. Better known in New York City as the Actor’s Chapel, this catholic church was built in 1920, the year the theater district moved into the area, and it thus became the place of worship of several well-known actors and dancers till the 1960s.

The church chimes play, “There’s no business like show business” in honor of the many distinguished theatrical parishioners who worshiped at its pews. Famous members of the congregation include Bob Hope, Ricardo Montalban, Rosalind Russell, Irene Dunne and Gregory Peck. Designed by renowned ecclesiastical architect, Thomas J. Duff, St. Malachy’s has been the venue of multiple weddings and funerals of famous actors and dancers. Among them are the marriage of Douglas Fairbanks Jr. and Joan Crawford, funeral of Rudolf Valentino, and the baptism of Herb Shriner’s children.

In 1991 extensive repairs were carried out to make St Malachy’s a comfortable and beautiful place to worship. Inside, the space produces a rather intimate feeling and is usually packed during Saturday vigil mass. Advertised as an actors’ spiritual retreat, the chapel's posted mass times include an 11 pm weekday mass “post-theater”.
Image by Tdorante10 on Wikimedia under Creative Commons License.