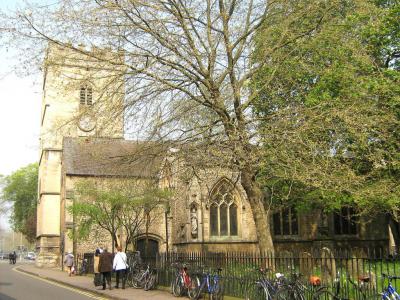 The ground on which St Mary Magdalen’s Church stands today has been a place of worship for over a thousand years, and you shouldn’t miss a visit to this beautiful church.

The original church on this site was a wooden affair and was burnt to the ground by the Vikings around 1013. In 1074, Robert d’Oyly built a chapel with a single aisle to replace the ruins of its wooden predecessor. The chapel was rebuilt and expanded in 1194 by Saint Hugh, the Bishop of Lincoln. In 1842, George Scott rebuilt the chancel and north aisle.

The interior is Victorian Gothic, softly lit by the sunlight streaming in through the stained glass windows. The lovely West Window depicts the city’s medieval history, and was executed in 1898 by Elizabeth Wigram.

The beautifully ornate font was sculpted in 1350; the Holy Water stoup was placed in 1513, the same time as the tower was built. There is an alabaster memorial dedicated to William Pickering that dates back to 1640, next to the north door. The raredos behind the High Altar was executed in 1894. The church’s full peal of ten bells was installed in 2003.
Image by Robert Cutts on Wikimedia under Creative Commons License.