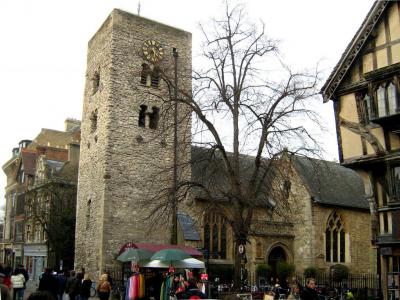 While in Oxford, you will certainly want to visit the Saxon Tower, which is the oldest building in the city. But don’t stop just there; the tower is attached to the lovely St Michael at the North Gate Church, and it would be a pity to visit the tower without exploring the church.

The original church was in the Domesday Book, but today only the tower remains. A part of the church – the chancel, the eastern wall nearest the altar in the south aisle, and the south door – date back to the early 13th century.

The stained glass in the East Window of the chancel was also created in the 13th century and is the oldest example of its kind in Oxford.

The Lady Chapel was built in the 14th century, while the north aisle and the nave were constructed a century later; the font was placed around the same time. The north aisle and the transept were rebuilt by John Plowman in 1883.The church was restored in 1953 after a fire destroyed a large part of it.

Since 1971, it has been the City Church of Oxford, which means that the Mayor and the Corporation of Oxford are expected to worship here. Once a month, the church hosts music recitals and jazz concerts.
Image by Robert Cutts on Wikimedia under Creative Commons License.