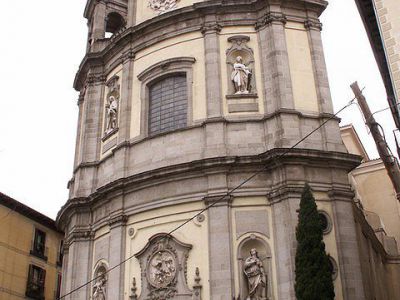 The Basilica of San Miguel is a baroque Roman Catholic church in central Madrid, Spain. It is located in San Justo Street, adjacent to the Archbishop's Palace. It is now owned by the Opus Dei. Constructions began in 1739, on the site of the parish church of Sts. Justus and Pastor. The work was commissioned by Cardinal Infante Luis of Chinchon, Archbishop of Toledo, who subsidized construction with 1,421,000 reales. Construction was completed in 1745. After the Napoleonic invasion, the church added the advocacy of Saint Michael (San Miguel), when the nearby parish church of San Miguel de los Octoes was torn down. The Italian composer Luigi Boccherini, who died in Madrid, was buried here until 1927, when Benito Mussolini repatriated the remains to his native Lucca. The cupola is decorated with frescoes (1745), by Bartolome Rusca, depicting the apotheosis of Santos Justo y Pastor.
Image by J.L. De Diego on Wikimedia under Creative Commons License.
Sight description based on wikipedia