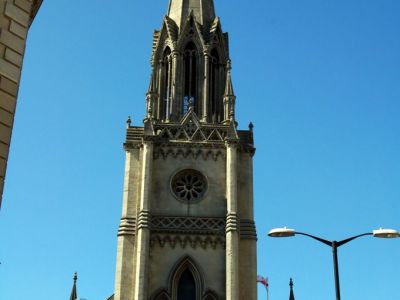 St. Michael’s Church is located at the junction of Broad Street and Walcot Street, in the bustling eastern end of the city centre. Approaching along Northgate Street, which once marked the northern gate into the walled medieval city, the church dominates the view ahead. One of a few pre-Georgian buildings still standing outside the old city walls, the church once gave its name to this new area of development north of the city centre. A perfectly quirky design for the more bohemian end of town, the high, narrow bell tower fits with the steep side streets and mazy flea markets of the surrounding streets.

First constructed in medieval times, the church was rebuilt in the Georgian era, and was completed to its present design in Victorian times. Designed by local architect George Phillips Manners, the church broke with convention in order to fit into this narrow strip of land. The altar, usually to the east of the bell tower, is tucked directly behind it, and faces north – making this church a unique find for architectural enthusiasts. St. Michael’s is an Anglo-Catholic church and runs Sunday services. Arrive early to secure a seat – this small city church serves two local congregations, following the closure of sister church, the Holy Trinity on Chapel Row.
Image by Erebus555 on Wikimedia under Creative Commons License.