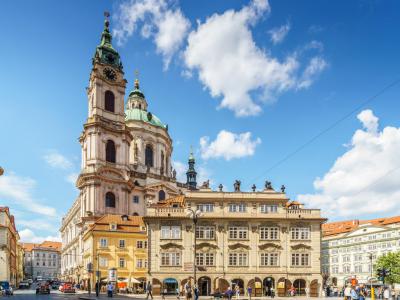 The Church of Saint Nicholas, also called the St. Nicholas Cathedral, is a Baroque church in Lesser Town, Prague. It was built between 1704-1755 on the site where formerly stood a Gothic church from the 13th century also dedicated to St Nicholas. It has been described as "the most impressive example of Prague Baroque" and "without doubt the greatest Baroque church in Prague and the Dientzenhofers' supreme achievement".

It was built by Christoph Dientzenhofer, later by his son Kilian Ignaz Dientzenhofer. The temple excels not only in architecture but also in the decoration. The Baroque organ has over 4,000 pipes up to six meters in length and was played by Mozart in 1787. The 79 m tall belfry is directly connected with the church’s massive dome and offers great panoramic views.

Why You Should Visit:
A cathedral of spectacular Baroque design and interiors, with plenty of historical information presented.

Tip:
Climb to the second floor to get a closer look of the ceiling paintings.
You may also attend one-hour concerts daily at 6 PM (except Tuesday) starting end of March to early November. Advent and Christmas concerts from 5 PM (selected days only).
Image by Sokoljan on Wikimedia under Creative Commons License.

There are many renowned historical and contemporary museums in Prague. They are usually located in old palaces that are monuments themselves. You can get the feel of the past and present of the Czech Republic while visiting some of the following museums in Staré Město area of Prague.