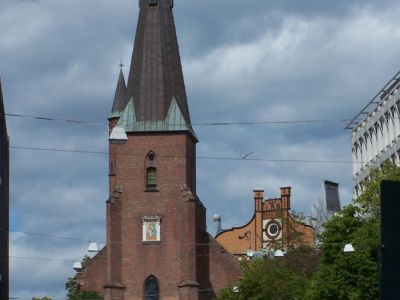 The cathedral was designed by architect H.E. Schirmer in the neo-Gothic style. Inaugurated in 1856, it became the main church of the Catholic Diocese of Oslo a century later. Highlights of the church’s interior include an altarpiece depicting Raphael’s Madonna, an Italian marble tabernacle donated by Pope Pius, and a throne used by Pope John Paul II in 1989. Fully restored in 1975, the church was fitted with a new high altar and pillars in the naves. The oldest item found in the building is the last surviving relic attributed to King Olav, the patron saint of Norway, after whom the cathedral is named.
Image Courtesy of Wikimedia and Cnyborg.
Sight description based on Wikipedia.