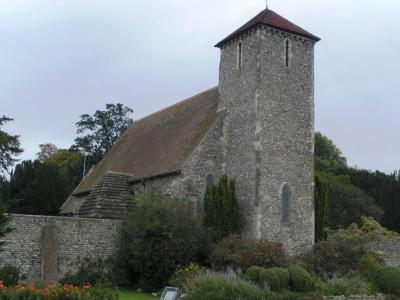 St Peter's Church is a former Anglican church in the Preston Village area of Brighton. The 13th-century building, standing on the site of two older churches, was restored in the late 19th century and again after a serious fire in 1906. It was the parish church of Preston until 1908, when the newly built St John the Evangelist's Church gained this status. The Diocese of Chichester declared St Peter's redundant in 1990, and it is now owned by the Churches Conservation Trust. It has Grade II listed status, reflecting its architectural and historical importance.

St Peter's Church is a flint building dressed with stone and with a roof of tiles, standing in a prominent position next to Preston Manor on higher ground than the rest of Preston Village. Built in the Early English style, it has a series of broad lancet windows—three on each side of the nave, and also in the chancel.
Image by The Voice of Hassocks on Wikimedia under Creative Commons License.
Sight description based on wikipedia