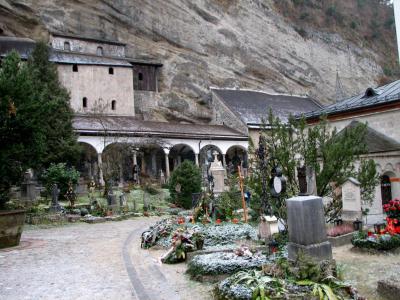 Editor's note: St. Peter’s Church will be closed for renovations from 25.9.2018 until provisionally 22.9.2019. The catacombs, cemetery, and bakery remain open, however.

St. Peter's Church forms part of the oldest functioning monastery in Austria. It also houses the oldest library and the oldest restaurant in the country. The cemetery has the last remains of several well-known citizens and a maze of catacombs built into a rock face.

St. Peter's Church was founded in 700 AD by the Franconian monk, St. Rupert and has continually functioned as the place of worship of a monastery since it was established. The monks were expelled during WWII but returned after the end of the war. The present church was built between 1125 and 1143 and has undergone several additions and restorations since. The main organ dates back to 1444 and there is an ornate gothic cross-ribbed vault in the atrium. The onion-domed tower was built in 1756 and the interior of the church has several magnificent rococo altars.

St. Peter's Cemetery is the last resting place of well-known citizens of Salzburg including the architect Santino Solari who designed the cathedral, Mozart’s sister Nannerl, an accomplished musician in her own right and Joseph Haydn’s brother Michael. The cemetery is surrounded by wrought iron fences and there are early Christian catacombs built into the surrounding rock face. A steep stone stairway leads to the catacombs. They are filled with early altars, faded murals and inscriptions.

***The Sound of Music Movie***
Toward the end of The Sound of Music film, the Von Trapps hide from the Nazis that wield flashlights behind the tombs in the cemetery of the Nonnburg Convent in Salzburg. The real Nonnburg cemetery, however, is extremely small and modest, so the filmmakers instead decided to use the picturesque cemetery of Saint Peter’s Church (Petersfriedhof) for the inspiration to build a Hollywood set where the actual filming took place. Ringing the edges of the flower-filled cemetery are the large crypts for the local wealthy families enclosed within the elegant wrought iron gates which are expertly reproduced in the movie.

While the real-life Von Trapps never hid in a cemetery, the scene and the confrontation with Rolf adds a great deal of drama to the plot, which is somewhat different from the original Broadway play produced in 1959.

Why You Should Visit:
Everything is free to visit except for the catacombs which cost not very much at all.