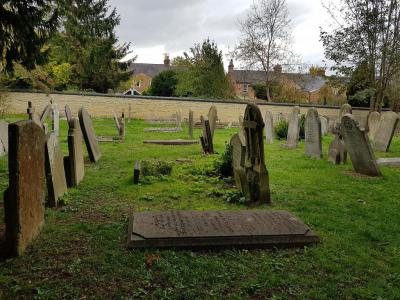 When you are in the Jericho area of Oxford, don’t just pass by St Sepulchre’s Cemetery, whose entry is on Walton Street; take a little time to stroll through it and observe the wildlife that now lives there among the ancient tombstones.

Following the Reformation a problem emerged in Oxford and most other English cities. More and more families wanted to build family vaults in their parish churchyards and other people wanted their tombs to rest undisturbed for perpetuity. With the rapidly growing population, parish graveyards were hard-pressed to find adequate space for everyone.

This problem came to a head in 1831 and later in 1849 during two cholera epidemics that ravaged the city. The authorities were obliged to close all parish church graveyards to avoid hygiene problems and three graveyards were created, none of them attached to any particular church; St Sepulchre’s Cemetery covered the northern part of Oxford.

The cemetery took over land that was bought from St John College and the former Walton Manor Farm that had been abandoned at the beginning of the 19th century. The farm’s gateposts still mark the entrance to the cemetery, but the lodge next to them was built in 1865 by Edward Bruton.

After the last epidemic the cemetery was the final resting place for many local families before being closed. Among the rather lopsided tombstones, you will find the graves of Thomas Combe, a Superintendent of the Oxford University Press, John Cavell, once the mayor of Oxford and Benjamin Jowett, Master of Balliol College and later Vice-Chancellor.
Image by Irid Escent on Wikimedia under Creative Commons License.