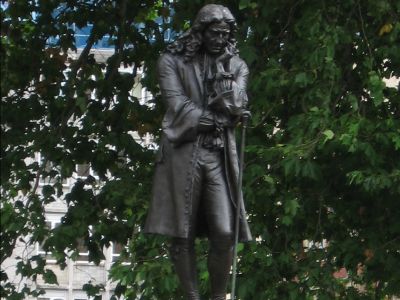 Edward Colston (2 November 1636 – 11 October 1721) was a Bristol-born English merchant and Member of Parliament. A statue, designed by John Cassidy, was erected in the centre of Bristol in 1895 commemorating Colston. In 1998, however, "someone scrawled on its base the name of one of the professions in which he made his fortune: SLAVE TRADER." He is viewed by some as an inspirational figure for the city, due to his donations of money to schools and other causes. His name permeates the city in such landmarks as Colston Tower, Colston Hall, Colston Avenue, Colston Street, Colston's Girls' School Colston's School and Colston's Primary School. He contributed to many of Bristol's educational institutions and hospitals, and also helped to restore some of the city’s churches. He is also remembered, particularly in some schools, by Colston's Day, on 13 November. A regional bread bun, the Colston bun, is named after him.
Image by William Avery on Wikimedia under Creative Commons License.
Sight description based on wikipedia