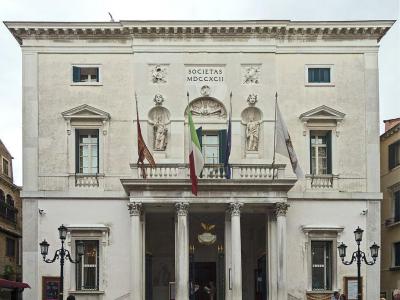 Teatro La Fenice ("The Phoenix") is one of the most famous and renowned landmarks in the history of Italian theater and in the history of opera as a whole. Especially in the 19th century, La Fenice became the site of many famous operatic premieres at which the works of the four major bel canto era composers – Rossini, Bellini, Donizetti, Verdi – were performed.

Doesn't look like much from the outside, but that's because all you need is to step inside to be transported to the elite 14th-century royalty of Italy. Plan an evening watching a romantic ballet or live opera show with your loved one in this historic theater and it will be the highlight of your trip!

Why You Should Visit:
One of Italy's most treasured theaters, and for good reason!
The self-guided audio tour lasts around 15 mins; what will take you more time is taking pictures and admiring the intricate detail of the architecture.

Tip:
If you go on a tour while the theater hall is closed for a rehearsal, it might be best to reschedule for a later time when it is open, as that is where all of the grandeur lies.
For the cheaper tickets, it might be hard to see the stage, but you can stand and listen to the music if you fancy.