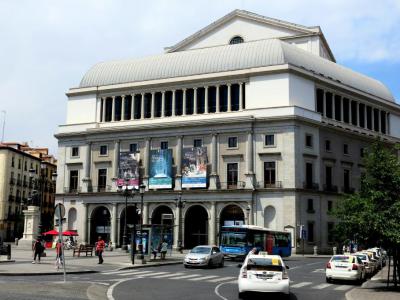 While in Madrid you might like to spend an evening at the opera and you couldn’t do better than book your seats at the Teatro Real, the Royal Theatre just in front of the Royal Palace.

The Teatro Real is Madrid’s major opera house, finished in 1850 under the explicit orders of Queen Isabelle II, who was an ardent opera lover and who had grown tired of seeing the half-finished building in front of her palace. On the inauguration night (which just happened to be on the queen’s birthday) the famous Spanish contralto Marietta Alboni played the leading role in Donizetti’s “La Favorita”. In 1863 Verdi gave the Spanish premier of “La Forza del Destino” here.

During the exile of the Spanish monarchy the opera house was renamed the National Opera Theatre. From 1867 to 1925 it housed the Madrid Royal Conservatory. During the construction of the metro system nearby, the building suffered serious structural damage and was closed down in 1925.

The theater reopened after extensive repairs in 1966, but was used as a concert hall, until 1990 when, after further renovations, it regained its status as an opera house. In 1997 the stage was improved with 18 articulated stage-sets, making even complicated background scenery easier to install. The orchestra pit was enlarged and acoustics were greatly improved by the elevation of the roof.

Today the opera house attracts some of the greatest operatic shows on the European circuit and its 1854 seats are quickly filled, so don’t hesitate to book in advance.
Image by Luis García on Wikimedia under Creative Commons License.
Sight description based on wikipedia