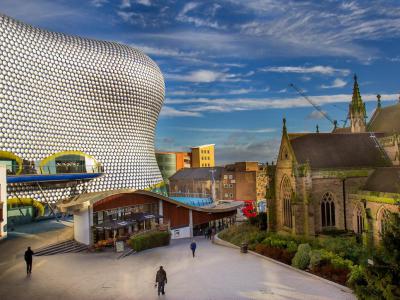 The Bull Ring is a major commercial area of Birmingham. It has been an important feature of Birmingham since the Middle Ages, when its market was first held. It has been developed into a shopping centre twice; first in the 1960s, and then in the 2000s. The site is located on the edge of the sandstone city ridge which results in the steep gradient towards Digbeth. The current shopping centre is the busiest in the United Kingdom with 36.5 million visitors in 2004, and is also the twelfth largest. The Bullring Shopping Centre was masterplanned and designed mainly by Benoy. The shopping centre consists of two main buildings which are connected by an underground passage lined with shops and is also accessible from St Martin's Square via glass doors.