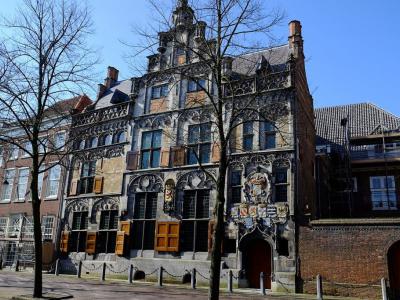 A Gemeenlandshuis, or Waterschapshuis is a building that is the headquarters of one of the Waterboards of the Netherlands. Early flood control is often called the Teerschouw, which loosely translated means "consumption during observation". This technique was a periodic check of the local dike system by the Dike-reeve and his men. If they found a problem, they would simply go to the nearest house or inn, and stay there for free until the problem was fixed. This was a fairly direct and simple form of water management. These measures were rarely necessary, since the local people took water management very seriously. The Dike-reeve and his men mostly met to discuss major issues and water improvements, and though they met at each other's homes until the 16th century, as the country grew and the water management issues became more complex, halls were purchased to meet each other regularly.

The Water Boards became governing bodies much like a town hall became a meeting place for the city council. In most Dutch cities, especially those on a river or located at a seaside port, the Gemeenlandshuis was the same size as the Town Hall. Examples can be seen today in Leiden, home to the Gemeenlandshuis van Rijnland, and Delft, home to the Hoogheemraadschap van Delfland.
Image by M.Minderhoud on Wikimedia under Creative Commons License.
Sight description based on wikipedia