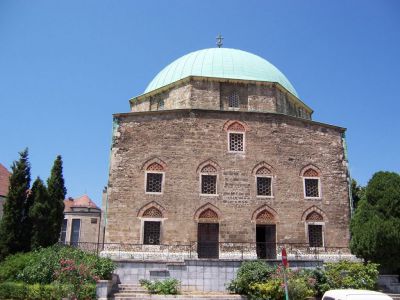 The Mosque of Pasha Qasim, Pecs (must see)

The Mosque of Pasha Qasim is one of the symbols of the city, located in the city centre, on the main square. Today, it functions as a catholic church. The building, hundred steps both its length and its width, was built by Pasha Qasim the Victorious between 1543 and 1546. The minaret of the mosque was brought down by the Jesuits in 1766. Standing at the highest point of Pécs's Széchenyi square, the mosque of pasha Qasim is the greatest example of Turkish architecture in Hungary. It was probably built in the second half of the 16th century. In the 1660s Evliya Çelebi, the famous Turkish traveller wrote of the overwhelming majesty of its view. The mosque was built upon the ruins of Saint Bertalan church by using its rocks - transforming it to the mosque of the city.

A number of changes had been made on the building between the 18th and the 20th centuries. Its minaret was ultimately taken down but had been previously enlarged. Only the main square part remained of the original structure: the octagon drum, covered by a dome. There are arc windows in two rows on the façade of its south-eastern, south western and north-eastern part; 3-3 and 4-4 pieces. Inside the church, in the remaining plaster parts the Turkish decoration and inscriptions of the Qur'an are clearly visible. The Turkish pulpit and the women's balcony were destroyed and the mihrab is not the original either.