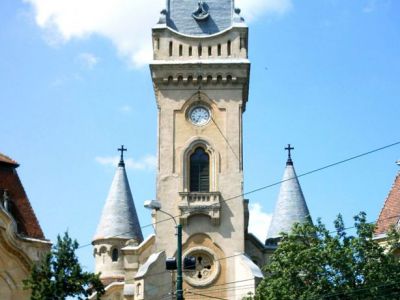 The Piarist Church is the church of Piarist Monks Order, who came to Timisoara in 1788 and received the Franciscan monastery and the church of St. John Nepomuc, which were built between 1733 and 1736. In 1909, the Piarists built a new church and a school. The old church was taken and demolished by the city in 1911; 261 skeletons were moved from its tomb. This church has Neo-Byzantine, Hungarian and Baroque elements from the old Franciscan church. Piarists have been active after 1948 as well. Here lived and died, in 2005, the last Piarist in the country - P. Francis Valo O.Sch.P. Since then, the church was taken over by Roman Catholic priests of the Gerhardinum Theological Lyceum.
Image by Turbojet on Wikimedia under Creative Commons License.