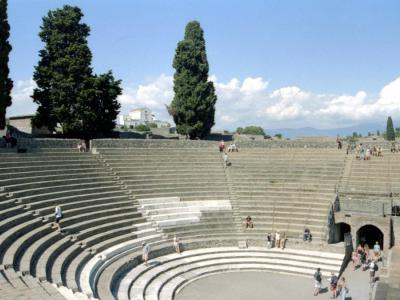 Pompei’s theatre was known as the Large Theatre during its use, to differentiate it from the Odeion, a nearby arena. The theatre was built in the 2nd century BC in the style of ancient Greek amphitheatres. Set in a natural indentation in the land, the theatre features tiered stone seating on sloping sides, leading to a central horseshoe shaped performance area. During the reign of Augustus Caesar the theatre reached its peak, being refurbished and extended by the Holconius brothers. They were rich wine growers from the region, and fitted the rows of seating with marble tops. Following the earthquake in 62AD the theatre was damaged, and the marble was removed. The stage had to be rebuilt, and a grand façade was added, complete with columns and statues.

The Holconius brothers also added an upper circle and two side boxes, which were reserved for guests of honour – much like a modern theatre. The Large Theatre could host 5000 people within segregated seating areas. The eldest Holconius brother even had his own reserved seat, inscribed with bronze lettering. Now open to the elements, the theatre was at the time covered by a large canopy, protecting the audience from the Mediterranean sun. The opposite side of the amphitheatre housed dressing rooms and access to the outer courtyard.
Image by kperkins14 on Flickr under Creative Commons License.