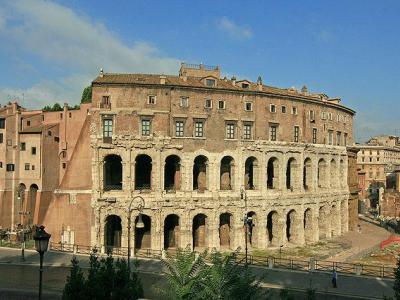 Theatre of Marcellus, Rome (must see)

Unlike the imposing Colosseum that dominates the area, Teatro di Marcello keeps it “low profile”, waiting to be discovered by genuine history or architecture buffs. The Colosseum may have been the biggest, but Teatro di Marcello is the first arena ever built in Rome, and was actually a model on which the Colosseum was designed later on. Unlike the Colosseum, this venue never saw bloodshed and was used solely for staging mythological dramas widely popular in ancient Rome.

Capable of seating up to 20,000 spectators, this was once the largest arena in the city. The theater was inaugurated by Emperor Augustus who named it after his nephew Marcellus, but it was actually Julius Caesar himself who laid down the foundation, but was murdered before the construction even started. A typical sample of classical ancient architecture, the building reflects three dominant styles of the era – Doric, Ionic, and Corinthian orders – spread across the three levels.

Centuries on, the theater is still very much intact and adds a great deal of charm to the Capitoline Hill. This is even more remarkable given that, in the 12th century, it served as a fortress and in the 16th century was turned into a palazzo. The upper part of the building recently has been converted into high-end accommodation – a much sought-after property harmoniously blending the ancient with the new. From June to October, the facility gives stage to musical concerts, which is yet another reason to explore this beautiful piece of history, given the opportunity.

Why You Should Visit:
Well preserved ancient Roman structure. Definitely adds charm even to the Capitoline Hill area. You can walk through at leisure and it's free.

Tip:
There are a number of bits and pieces of ruins scattered about this site, so be sure to check them out, too.
Image by Jensens on Wikimedia under Creative Commons License.