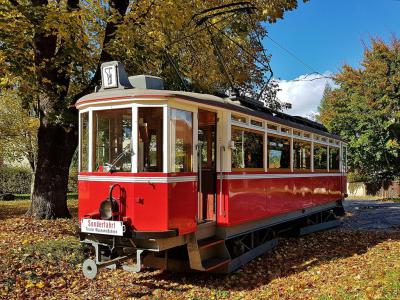 The Tiroler MuseumsBahnen (TMB) s a railway society in Austria whose aim is the preservation and/or documentation of the historically important branch lines (known as Localbahnen) and their rolling stock in the state of Tyrol. When, in 1983, it finally became clear that the 79-year old railbuses on the Stubai Valley Railway (Stubaitalbahn) were to be withdrawn from service, the Tiroler MuseumsBahnen Society was founded in May of that same year "with the aim of preserving these historically important vehicles for posterity."

Although initially the prospect of acquiring suitable premises for the society did not look good, thanks to political supporters, including the then mayor, Nischer, the former locomotive depot and part of the Stubaital station (waiting room and movements office) were able to be acquired and the Localbahn Museum was opened as early as summer 1985.

Operation hours: From May to October, every Saturday: 9 am - 5 pm.

This sight is featured in a self-guided walking tour of Innsbruck, Austria within the mobile app "GPSmyCity: Walks in 1K+ Cities" which can be downloaded from iTunes App Store or Google Play. Please download the app to your mobile phone or tablet for travel directions for visiting this sight. The app turns your mobile device to a personal tour guide and it works offline, so no data plan is needed when traveling abroad.

Traveling is fantastic, as people love to recollect upon the memories long after they are back home. The nightlife is one of the aspects that make vacations so memorable. If you're searching for that experience while in Innsbruck, then check out our guide to the city's nightlife.

Austrians are rather conservative as they prefer to live in accordance with old traditions and standards. For example, Austrians chose to drink only high quality beer, eat well, visit the local pastry, and enjoy the occasional theatre. They like the everyday style of life. If you too want to cherish the simple things in life, check out our daily guide.