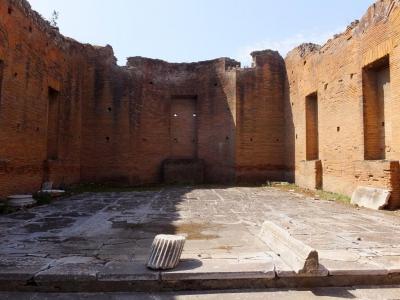 Like most modern day cities, the ancient settlement of Pompei had a civic centre at its heart, including markets (the Forum and Macellum), important places of worship, and a municipal office, from which the city’s rulers operated. The town council building stands on the southern edge of the Forum, and is comprised of three identical buildings. A number of distinct council offices ran from this site; the most important was the Duumviri, Pompei’s highest authority. Others included the office of the Aediles, who maintained roads and buildings, and the Council of Decurions, a board of local figures that acted as a panel of councillors.

Whilst it is apparent that many local dignitaries used the buildings, historians cannot be certain which buildings housed the various offices. The building closest to the Basilica was probably the Curia – the seat of the town council. It still has a marble floor, and a number of niches in the wall to house statues. The central building of the three is believed to have belonged to the Duumviri. A square of small columns is thought to have once contained a podium that housed town records and files. The third building, on the left as you approach, is therefore thought to belong to the office of the Aediles.
Image by Eric Livak-Dahl on Flickr under Creative Commons License.