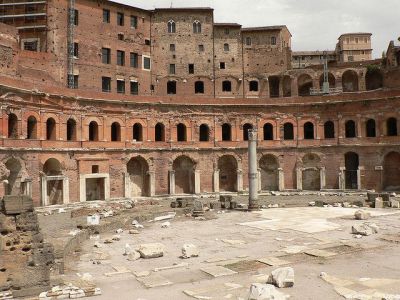 Trajan's Market is a complex of ruins, once part of Trajan's Forum in Rome. The remaining buildings (or rather fragments thereof) that offering a glimpse into the daily social and business activities of the ancient Roman capital, are now carefully restored.

The arcades in the market are believed to have served as administrative offices for Emperor Trajan himself. The shops and apartments were spread across multiple levels, some of which are open to visitors today. The world's oldest shopping mall, if you like, this venue comprised both a marketplace and a cultural center, attesting to which fact are certain elements, like the delicate marble floors, remnants of a library, as well as the triumphal column, which is the largest standing ancient structure in Rome after the Colosseum.

Trajan's Market was built around the year 100 AD by Apollodorus of Damascus, the architect who always accompanied Trajan on his voyages. Certain parts of the building, like the still visible today floor levels within the market and some fortification elements, like the "militia tower", were added during the Middle Ages. Also, a convent appeared in the area at a later period, but that was demolished in the early 20th century for the purpose of restoring Trajan's Market to its original form.
Image by lostajy on Flickr under Creative Commons License.