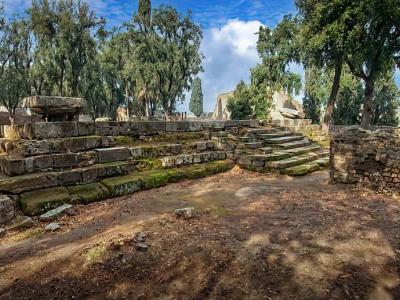 The Triangular Forum stands at the highest point of Pompei, on the brow of the hill on which the city was built. It is even visible from ships passing along the coast. A central public space, it has a number of important buildings around its perimeter. The large theatre connects to the forum via a stairway, whilst two gymnasiums and a bakery also back onto the open space. This was at odds with the Triangular Forum’s main purpose as a sacred, reflective spot.

A Doric temple built from Sarno limestone stands in the centre of the forum, dating from the 6th century BC. Believed to be a temple to Hercules, and later used by the cult of Minerva. A colonnade, formed of ninety-five columns, was built around the forum in the 2nd century BC to preserve the forum’s tranquility. It is thought that the temple was abandoned long before the disasters 250 years later, however.

A number of intriguing features remain in the Triangular Forum today. There is a mysterious tomb like structure at the foot of the ruined temple, thought to be a monument to the founder of Pompei. You can also find the remains of three tuff stone altars, dated to the pre-Roman era, and a well flanked by Doric columns. Behind the well, a semi-circular tuff stone seat offers the city’s finest view over the Gulf of Naples to the west.
Image by Wknight94 on Wikimedia under Creative Commons License.