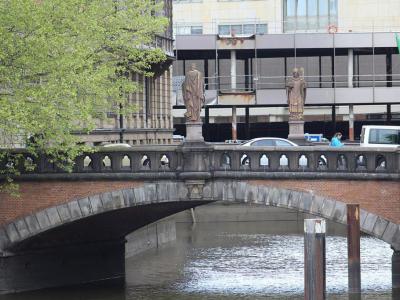 The Trostbrucke is a small, historic bridge which crosses the Nikolaifleet, one of many narrow inlets connecting the city’s docklands to the River Elbe. Located to the south west of the city centre, it once marked the boundary between Hamburg’s old and new towns. The city has expanded to the south since then, but the two statues on the bridge celebrate the ancient and modern founders of the city. They are Bishop Ansgar, the founder of the cathedral, which was once found in the old town, or Aldstadt; and Count Adolf III von Schauenberg, who created the new town, or Neustadt.

The bridge is made of stone, and comprises a single arch, with the two statues set in the centre, facing towards each other from either side. The Neustadt area was originally built to accommodate merchants in the city’s maritime heyday. The bridge was completed during this prosperous era, and opened to the public in 1881. Trostbrucke translates as ‘comfort bridge’. Whilst nobody knows for certain, it is believed that it earned its name as a picturesque point on criminals’ journeys to the local courthouse. It’s said that for many, the view of the river was the last comfort to them before they were sent to the gallows.
Image by GeorgHH on Wikimedia under Creative Commons License.