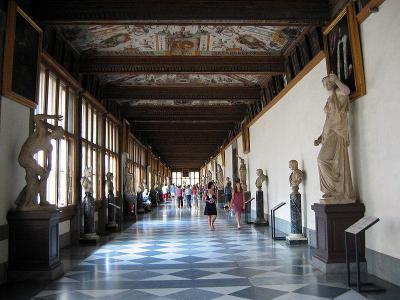 If you were limited to visiting just one Renaissance location in Florence, or the whole world for that matter, the most obvious choice would be the Uffizi Gallery. Housed in the Palazzo degli Uffizi, initially designated as the magistrate office – hence the name "uffizi", erected in the 16th century by Giorgio Vasari for Cosimo Medici, the 1st Duke of Florence, it represented an ideal setting for the Medicis' art collection as well. The gallery has been open to the public since 1765 and, to this date, become one of the most popular tourist attractions in Florence.

The displayed here must-see works of art include Sandro Botticelli's “Birth of Venus” and “Adoration of the Magi”, not to mention the works of Leonardo da Vinci, Michelangelo, Caravaggio and other eternal greats. The collection is truly magnificent and you can easily spend a whole day without noticing!

While paintings and statues are what most people come here for, the decoration of the rooms, especially the ceilings, are just as spectacular and worthy of attention. With more than 50 opulent rooms to explore, it is actually quite hard to absorb everything in one go, so you might want to take a break and “recharge batteries” at an on-site cafe with a terrace which, among other delights, offers visitors some truly great views unseen anywhere else.

Given the world-class status of the museum, it is perpetually busy and the hours-long queue here is not uncommon, especially during peak season. Those who book their tickets in advance from the official website, have a substantially shorter wait and may get it cheaper, too.

***FLORENCE PALACES WALK***
The Uffizi's internal courtyard is so long, narrow and open to the Arno at its far end through a Doric screen that articulates the space without blocking it, that architectural historians treat it as the first regularized streetscape of Europe. Vasari, a painter and architect as well, emphasized its perspective length by adorning it with the matching facades' continuous roof cornices, and unbroken cornices between storeys, as well as the three continuous steps on which the palace-fronts stand. The niches in the piers that alternate with columns of the Loggiato are filled with sculptures of famous artists in the 19th century.

***MICHELANGELO'S MASTERPIECES***
In the first 8 years of the 1500s, Michelangelo not only carved his giant David and the Bruges Madonna but also chiseled seven other sculptures and four smaller statues for an altar. He also accepted commissions to paint, and the one work displayed in the Uffizi, painted in 1504, is the Doni Tondo ("Holy Family"), a round-shaped painting (nearly four feet in diameter) vividly depicting the Virgin Mary and the Christ Child, along with St. Joseph. The juxtaposition of bright colors foreshadows the same use of color in Michelangelo's later Sistine Ceiling frescoes.

It is argued that the picture was used by Michelangelo to defend the Maculist point of view, a philosophy of the Dominican order rejecting the idea of the Immaculate Conception of Mary. The Maculist view is that the Virgin did not receive her sanctification at birth but at the moment of the incarnation of Christ; thus, the image depicts the moment of Mary's sanctification by showing the Christ Child blessing her. Michelangelo depicts Christ as if he is growing out of Mary's shoulder to take human form, one leg hanging limply and the other not visible at all, therefore making him a part of Mary.

Tip:
If you decide to go, note that no liquids are allowed onto the premises and the restrooms are available only at entrance and exit.
At your own risk, you may try and go an hour or two before closing just in hopes to get a ticket without queuing. Good luck!