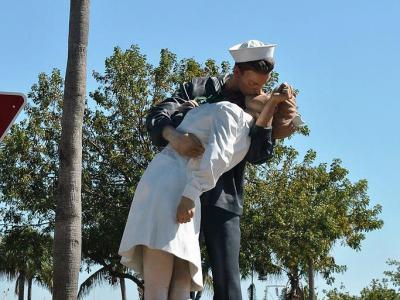 Unconditional Surrender is a series of sculptures by Seward Johnson resembling a photograph by Alfred Eisenstaedt, V–J day in Times Square, but said by Johnson to be based on a similar, less well known, photograph by Victor Jorgensen.
Seward Johnson first built a life-size bronze precursor to the huge statues of Unconditional Surrender using computer technology. A 25-foot (7.6 m)-tall styrofoam version of the work was part of a temporary exhibition in Sarasota, Florida in 2005, at its bay front. Johnson established the Sculpture Foundation to disseminate his work
Image by Catalán on Flickr under Creative Commons License.
Sight description based on wikipedia

This sight is featured in a self-guided walking tour of Sarasota, Florida within the mobile app "GPSmyCity: Walks in 1K+ Cities" which can be downloaded from iTunes App Store or Google Play. Please download the app to your mobile phone or tablet for travel directions for visiting this sight. The app turns your mobile device to a personal tour guide and it works offline, so no data plan is needed when traveling abroad.