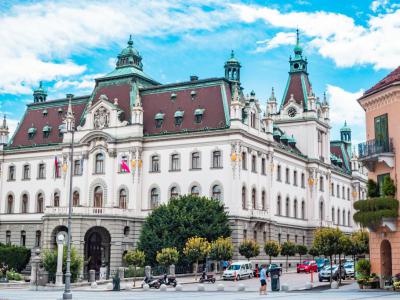 University of Ljubljana, Ljubljana (must see)

The University of Ljubljana is the first and the largest university in Slovenia; with 64,000 enrolled graduate and postgraduate students, it is among the largest universities of Europe. Although certain academies (notably of philosophy and theology) were established as part of the Jesuit-led higher educational drive as early as the 17th century, the university as such had first been founded in 1810 under the name Écoles Centrales by the French Imperial administration of the Illyrian Provinces. In 1941, Jože Plečnik's National and University Library was completed, as one of the most important infrastructure projects of the university in the inter-war period. The university was initially located in the center of Ljubljana where the central university building and the majority of its faculties are located. Later on, some new, modern buildings and a small scale campus were constructed in the northern part of the city (Bežigrad).