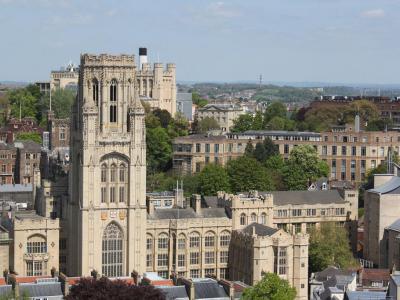 This grand and splendid building is a major landmark in Bristol and one of the most famous parts of Bristol University. The octagonal belfry at the top is an open structure designed to amplify the bell’s sonorous tones. The Wills Memorial Building (also known as the Wills Memorial Tower or simply the Wills Tower) is a Neo Gothic building designed by Sir George Oatley and built as a memorial to Henry Overton Wills III. Begun in 1915 and not opened until 1925, it is considered one of the last great Gothic buildings to be built in England. Situated near the top of Park Street on Queens Road in Bristol, United Kingdom, it is a landmark building of the University of Bristol that currently houses the School of Law and the Department of Earth Sciences, as well as the Law and Earth Sciences libraries. It is the third highest structure in Bristol, standing at 68 m (215 ft). It has been designated by English Heritage as a grade II* listed building and serves as a regional European Documentation Centre.
Image by Arpingstone on Wikimedia under Creative Commons License.
Sight description based on wikipedia