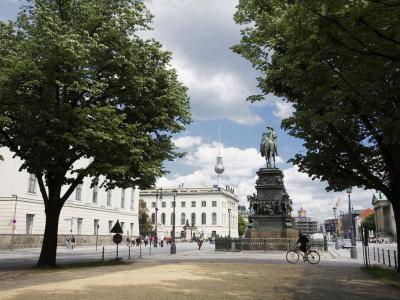 Unter den Linden ("under the linden trees") is an iconic boulevard at the heart of Berlin's historic Mitte district, named for its linden (“lime”) trees lining the grassed pedestrian mall between two carriageways. This section of the city developed from a bridle path laid out in the 16th century by Elector John George of Brandenburg to reach his hunting grounds in the Tiergarten, and was replaced by a boulevard of linden trees in 1647. By the 19th century, as the city expanded to the west, Unter den Linden had become the grandest street in Berlin.

It runs east-west starting at the Brandenburg Gate and ending at Museum Island with many historic landmarks here or nearby, like the Berlin Opera House, the Russian embassy, Alexander Plaza (Alexanderplatz), museums, and statues (including the equestrian statue of Frederick the Great), and more. It is also home to many impressive car shops, such as Mercedes-Benz and Bentley, and souvenir outlets.

Strolling this broad avenue is a fine pastime, if you're tired of giving full attention to all of the wonderful museums and gorgeous city sights, and will give you a good feel of German history.

Why You Should Visit:
At one end you have the Brandenburg Gate and Pariser Platz, and at the other end – Berlin Cathedral and Alexanderplatz. What's in between is a feast for the eyes.

Tip:
Get your walking shoes on and immerse yourself.
If you visit in early October, catch the Festival of Lights.
Image by Jorge Royan on Wikimedia under Creative Commons License.
Sight description based on wikipedia