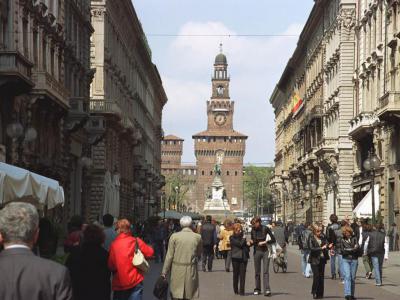 Via Dante is an elegant pedestrian street in the heart of Milan, connecting Piazzale Cordusio (and the Cordusio metro station) with Largo Cairoli (Cairoli metro station). It is near to the city's Castello Sforzesco and is named after the Florentine poet Dante Alighieri. The street is known for its palaces and theatres, as well as ample shopping and dining opportunities: cool outdoor restaurants, gelato places, cafés and bars, some of which are quite expensive, though.

Via Dante is also lined with numerous fine buildings, mainly from the 18th and 19th centuries. The most notable one is the Piccolo Teatro (literally "small theatre"). Up until 1958, the street contained several transport links and a tramway line. In 1996 Via Dante was fully pedestrianized.

In the afternoon, most of the street is in the shade, making it a pleasant walk in the summer heat. There are usually a few street performers there to entertain the crowd.
Image by BerndGehrmann on Wikimedia under Creative Commons License.
Sight description based on wikipedia