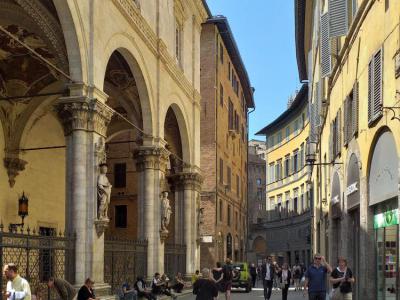 Via di Città, Siena (must see)

The Via di Citta is one of the main streets of old Siena. Today it is a pedestrian road that is flanked by many of the well known historical buildings in the city. The Via di Citta or City Road was once called the Via Galgaria. This was because it consisted at the time of the shops of the city shoemakers. The road is laid as a slope and the highest point which is a quarter flanked by medieval structures commands spectacular views across the Siena. At one end of the street is a square called the Quattro Cantoni. The square is the meeting point of the main streets of the city. In the 15th and 16th centuries, the high society of the city frequented the site.

The beautiful buildings along the Via di Citta are the Palazzo Patrizi that dates back to the 14th century and houses the Accademia degli Intronati today, the music academy at the Palazzo Chigi-Saracini, the Palazzo delle Papesse, a Florentine renaissance style building that houses a contemporary arts center, the Gothic style, Palazzo Marsili and the Loggia della Mercanzia, the Sienese equivalent of a chamber of commerce. Of the three main streets of old Siena, the Via di Citta is flanked by the most stately and elegant buildings in the city.
Image by MarkusMark on Wikimedia under Creative Commons License.
Sight description based on wikipedia