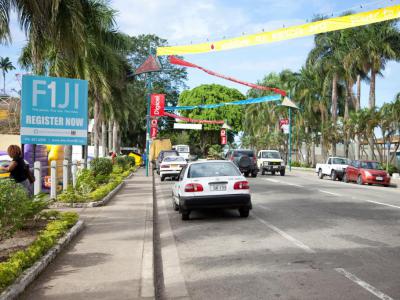 Suva’s showcase, Victoria Parade begins at the convergence of Gordon and Scott streets. Originally an unpaved street, with only a row of raintrees separating it from the shore, the city’s main drag has seen the sea recede as more and more land has been reclaimed over the years. Ambitious city plans once showed a visitors’ village nestled among man-made lagoons in the vicinity of the Civic Centre. In view of global warming, it’s probably best that the project never materialized.

Nowadays, Victoria Parade remains the throbbing epicenter of business, government, and shopping. Every bank, bureaucratic complex and travel bureau is found here, or within a stone’s throw. To sightsee in Suva means strolling down Victoria Parade and perhaps chatting with a friendly local.

Victoria Parade’s past is less glamorous and certainly less visitor-friendly. For years, its condition did not pay the reigning monarch much honor. An early issue of the Suva Times contained this complaint:

"At present there is barely room for a handcart to be drawn over and in consequence occasional cartloads are precipitated into the ditch with no benefit to the contents at any time and sometimes with grievous damage. We do not speak of the danger of life and limb because that is beneath the reckoning of any road maker from railway companies downward, but we may suggest that an effort to meet the one difficulty would also facilitate the passage of Her Majesty’s subjects in their goings to and from on Victoria Parade. A pair of lovers are scarcely safe in the present state of things if tempted to wander under a shadowy moonlight. "

Even by the mid-20th century, things had not improved much. The streets of the town were surfaced with coral, and on one occasion Victoria Parade was top-dressed with red soil, and before long, it was a sea of mud, inches deep. Eventually, a length of road near the Town Hall was properly formed and tar-sealed, and this was such a success that later the whole Parade was done in the same way.

The footpath, however, stopped at the corner of Macarthur Street, a circumstance reflected by John Russell, a well-known writer of short stories about the South Pacific, in the title of his 1921 book, Where the Pavement Ends.

In 1914, to facilitate the tourist trade, the street was extended “out of town” to the newly-built Grand Pacific Hotel.
Image Courtesy of Kathleen Hawkes.