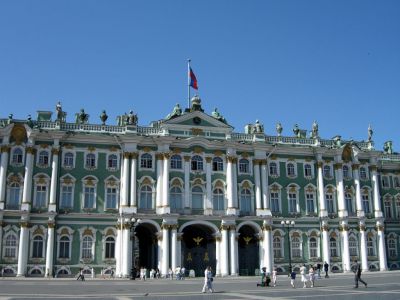 Located between the Palace Embankment and Palace Square is the Winter Palace, the former official residence of the Russian Royal Family, from the 1700s to 1917. The Elizabethan Baroque building is most famously associated with Catherine the Great who acquired the impressive art collection the palace holds. The current structure is the fourth version of the palace as all the previous ones were extensively remolded.

The design of the palace is exquisite. Golden emblems adorn the exterior and the gates, while white and gold accents accent the interior. Luxury is in abundance with marble accents, gorgeous sculptures, and painted ceilings. Some of the must-sees are Nicholas Hall, an 11,870-foot room that was the setting for many balls and receptions, carriages that are decorated with gilded wooden carvings, the State Gala staircase with its red velvet carpet, and the medical instruments of Peter I.

From February to October 1917, the palace briefly became the seat of Russian government. After the Bolshevik government moved the capital of Russia from St. Petersburg to Moscow, the palace became a part of the Hermitage Museum.

Over 2.5 million visitors attend the palace each year. There are 350 rooms with over three million exhibits available for viewing. Among them are the works of Leonardo da Vinci, Raphael, Rembrandt, Rubens, Van Dyck, Goya, El Greco, Monet, Renoir, Matisse, Picasso, Van Gogh, and many others. You must purchase a ticket to film video or take photographs. The palace is particularly breathtaking when viewed against the backdrop of the winter snow.

Why You Should Visit:
Pride of St Petersburg!

Tip:
Make sure to arrive by opening time at 10:30 so you can get ahead of the crowds.
Best to go with a tour guide to get the most out of your visit – the audioguide is vital if you are on your own.