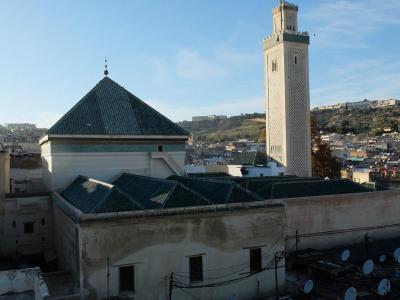 The Zaouia Moulay Idriss II is a "zaouia" (a shrine and religious complex; also spelled "zawiya") dedicated to and containing the tomb of Idris II, who ruled Morocco from 807 to 828 and is considered the main founder of the city of Fes and of the first Moroccan Islamic state.

In the year 1308, almost five centuries since the death of Moulay Idriss II, an uncorrupted body was found on the spot. People believed this was Moulay Idriss II and founded the zaouia. Originally built by the Marinids circa 1440, over the centuries the building was amended heavily, and almost completely replaced in the 18th century by Moulay Ismail in a style typical of the Alaouites that govern Morocco to this day.

Moulay Idriss II is the patron saint of the city of Fes, and it is believed that walking through his zaouia is beneficial for strangers visiting the city, boys before being circumcised and women wanting to facilitate childbirth.

Tip:
Unless you're a Muslim, you can't go in – but you can peek through the door and admire the tile work and carvings on the outside (check out the side as well as the front, as you can see surprisingly quite a lot of the building through the different entrances.).