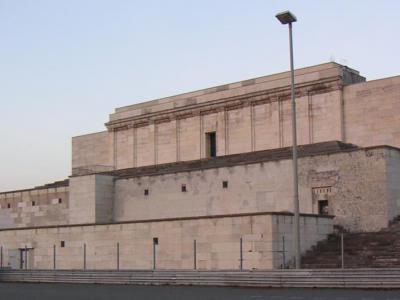 The so-called Zeppelinfeld is the location for the infamous Nazi rallies of the late 1920s and 1930s. One of the few remaining parts of a vast complex intended as the spiritual home of the Nazi party, the rather battered remains nevertheless still give the feel for the scale of the events that are now etched into history.

Consisting of a large grandstand with a width of 360 meters (400 yards) and a smaller stand, Zeppelinfeld was one of Albert Speer's first works for the Nazi party and was based upon the Pergamon Altar. The grandstand is famous as the building that had the swastika blown from atop it in 1945, after Germany's fall in World War II.

Standing on the rostrum at which Hitler expounded his fascist political philosophy is frankly a rather ambivalent experience: on the one hand, it feels a place of tangible evil; on the other, the dilapidated ruins provide reassurance that such a regime was, and can be, overcome.

Tip:
If you go by yourself and not with a tour guide, please no Nazi salutes or Heil Hitlers or you could get arrested.
Image by Jaimrsilva on Wikimedia under Creative Commons License.
Sight description based on wikipedia