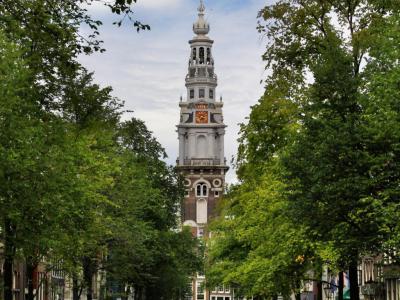 One of the prettiest towers in Amsterdam that even inspired a few of Monet’s paintings is at the South Church or the Zuiderkerk. Built during the years of 1603 to 1614, the Zuiderkerk was the first protestant or Reformist Church in Amsterdam. This magnificent structure was designed by renowned Dutch architect Hendrick de Keyser.

The Church was built with respect to the Renaissance style of architecture. There are claims that the design of Zuiderkerk even inspired the great British architect Sir Christopher Wren, the builder of St Paul’s Cathedral in London.

The Zuiderkerk may have acted as inspiration, model and trophy for a few but there was a time when the structure also served as a morgue for the city. During the final years of the Second World War, there was a fierce scarcity of food and people were dying faster than they could be buried. Famous Dutch painter, Rembrandt is also connected to this Church in several ways. Three of Rembrandt’s children were buried at the Zuiderkerk. Because of the proximity of his house to the church, there is also speculation that he finished some of his most famous works at the church rather than his studio. Today, the Church serves as Municipal Exhibition Center, displaying Amsterdam’s future building plans.
Image by Dominik Bartsch on Flickr under Creative Commons License.
Sight description based on wikipedia