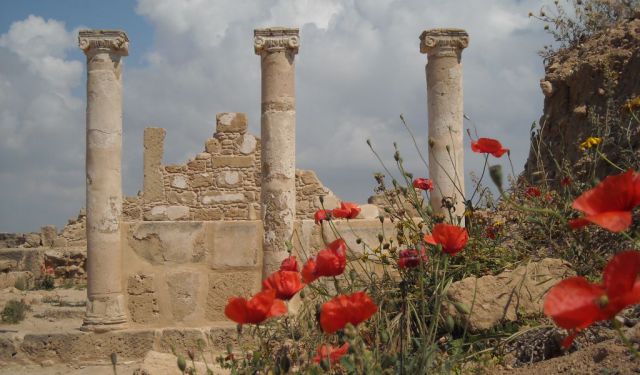 Take a walking tour of ancient Paphos and discover how the Romans used to live. Now, a seaside resort, the town was built on the ruins of a grand Roman city that was once capital of Cyprus. You will see churches and amphitheatres along with fortress ruins and many hidden gems. We will also visit the picturesque harbour and medieval fort as well as the fascinating mosaics that tell many of the island’s legends.
This article is featured in the app "GPSmyCity: Walks in 1K+ Cities" on iTunes App Store and Google Play. You can download the app to your mobile device to read the article offline and create a self-guided walking tour to visit the attractions featured in this article. The app turns your mobile device into a personal tour guide and it works offline, so no data plan is needed when traveling abroad.

Guide Name: Ancient Paphos
Guide Location: Cyprus » Paphos
Guide Type: Self-guided Walking Tour (Article (A))
# of Attractions: 8
Tour Duration: 4.0 Hour(s)
Travel Distance: 3.2 Km or 2 Miles
Author: Patricia Green
Author Bio: I have been flying around the world the last 12 years as a flight attendant, on commercial and private jets. I have lived on the island of Cyprus for 7 years and have worked in tourism here too – it is home to me. At the present time, I fly as a freelancer, work as a travel writer and am writing a book on my adventures... I love to travel and write!
Sight(s) Featured in This Guide:
1

We start at the Church of Ayia Kyriaki - a hidden gem behind the bustling seafront and not often found by tourists. It is an ancient church next to the ruins of the Basilica of Chrysopolitissa and St Paul’s Pillar. It was built on the ruins of the basilica in the 13th century of which you can still see the remains. You can also go inside the church, if there are no services and see the icons of St Paul and St Peter and Ayia Kyriaki. As a mark of respect, please cover your knees and shoulders. Spend a little time here to wander around outside, not only are the surrounding ruins fascinating, you will also see mosaics and water fountains. The Basilica of Chrysopolitissa is one of the most interesting and picturesque sites in Paphos next to the church of Ayia Kyriaki. However there is little information about it, but one would imagine that it was destroyed by the great earthquake of 1222. The basilica had 7 aisles of which you can still see some of the columns and the mosaic floors are surprisingly well preserved. The site is completely open so you can explore the mosaics and ancient tombs. The marble pillars of the church remain where they fell and have an ethereal quality about them. Do take a camera with you, you will be surprised at all that you find there. Set in the grounds of Ayia Kyriaki Church and the Basilica ruins you will find a small monument of religious importance. St Paul’s Pillar is made of white marble and is where the apostle St Paul was once flogged in 45 AD. He received 40 lashes for preaching his beliefs, before the Roman governor of Paphos eventually converted to Christianity. It is now a popular stop for pilgrims visiting the many religious sites in Cyprus or following in the ‘footsteps of St Paul.’
2

This is one of the only Frankish buildings to survive in Paphos and it was originally built in the 7th century. However in the 15th century, the Ottoman’s rebuilt the baths and added the cupolas and extended the walls. It is unusual as an olive tree root is embedded in it and you can take a look inside, although it’s a bit spooky! The domed roof is very interesting from the inside as it has lots of holes that act as a skylight and you can see the original stone benches. It is thought that the baths would hold over 100 bathers at a time.
3

Unfortunately, there is no access to this recently found Hellenistic theatre at Fabrica Hill, but you can still take photos from the road. It was built in the 3rd century BC and is probably the oldest site in Paphos. It is thought to have been built in the same style as the theatre at Alexandria in Egypt. Behind the hill is a series of underground caves, believed to have been used for storage in ancient times, but that is only speculation. Whilst you are walking around these little backstreets, keep your eyes open as often you just stumble upon a new antiquity – Paphos is full of them.
4

This unassuming place is another little treasure, which tends to go unnoticed. The terebinth tree above it is easily spotted as it has rags tied all over its branches – these are tied in the hope that they will cure the illness of the person who tied the rag. Underneath the tree via a few steps down, you will find the catacombs and tiny Church of Ayia Solomoni. It is carved out of limestone and dates back from the Hellenist period. It was originally a catacomb and later made a church - you can still see the 12th century frescoes inside.
5

This medieval Byzantine castle was built in the 13th century to replace the Fortress of Saranta Kolones, which perished in the earthquake of 1222. It was part destroyed by the Venetians in 1570 and rebuilt by the Ottomans after their invasion in the 16th century. As well as protecting the harbour, it has been used as a prison and salt warehouse. Since 1935, it has been considered an ancient monument and is the most famous landmark in Paphos. It has a wooden bridge over the moat, a central courtyard and you can climb to the top for views over the harbour. Nearby, you can also see the remains of the ancient city walls. Hours: 08.00-17.00 (November to March), 08.00-18.00 (April to October), 08.00-19.30 (June to August)
6

The Paphos Archaeological Park and Mosaics are probably what the town is most famous for. They were first discovered by a farmer ploughing his field in 1962 and to this day new mosaics are still being unearthed. The mosaics tell mythical stories and lie in the remains of a Roman villa built in the 2nd century AD. These mosaics are part covered/part open air and divided into different houses. In the House of Dionysus you can see mosaics of the god of wine as well as Narcissus, Apollo and Poseidon. The sad tale of Pyramus and Thisbe is also depicted here. The House of Aion has mosaics from the 4th century AD and you can see Leda and the Swan and the procession of Dionysus, just to name two. More mosaics can be found at the House of Orpheus and the House of Theseus.

After you have discovered all the fine mosaics and had a quick lesson in Greek mythology, it is time to find out more about how the Romans lived in Paphos. You are free to explore the park as you wish, there is little signage and you will find all sorts of ancient ruins including the Agora (or market) and ancient temples, so just keep your eyes open! The Odeon is one of few ancient sites here that are still intact. It is an ampitheatre dating from the 1st century AD and made entirely from limestone blocks. Today, it is still used for concerts and plays on occasion. In the summer months, please do take sunscreen and water with you – the park covers a wide area and there is no protection from the sun or service facilities (these are only at the main entrance).
8

Saranta Kolones meaning 40 columns, is the old fortress ruins. This grand Byzantine fortress was built in the 7th century AD and fell to ruins after the earthquake of 1222. You can see the remains of a square fort with a moat and many towers. Recently, remains of a sugar mill inside the fortress where found. This fort was surrendered to Richard the Lionheart in 1191 and survived the Frankish invasion until the great earthquake shook it to ruins. Many residents of Paphos would have rebuilt the city with the fallen masonry. Luckily, there is still plenty to be seen and it is a beautiful place to explore, especially in spring when the wild flowers are out.