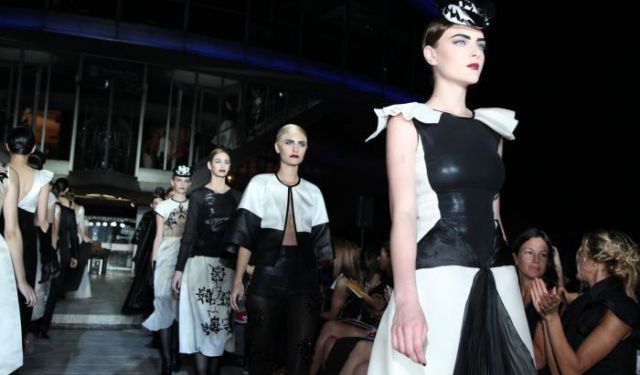 Buenos Aires’ trendy Palermo district is the stomping ground of the city’s independent, avant-garde fashion designers and a paradise for discerning fashionistas who love to shop. Follow our guide to uncover the best local names and must-have pieces on the scene.
This article is featured in the app "GPSmyCity: Walks in 1K+ Cities" on iTunes App Store and Google Play. You can download the app to your mobile device to read the article offline and create a self-guided walking tour to visit the attractions featured in this article. The app turns your mobile device into a personal tour guide and it works offline, so no data plan is needed when traveling abroad.

Create Your Own Self-Guided Walks in Buenos Aires
Guide Name: Best Fashion Boutiques
Guide Location: Argentina » Buenos Aires
Guide Type: Self-guided Walking Tour (Article (A))
# of Attractions: 7
Tour Duration: 1.0 Hour(s)
Travel Distance: 1.4 Km or 0.9 Miles
Author: Sophie Lloyd
Author Bio: British-born Sophie Lloyd has been working as a lifestyle journalist and editor since 2005 and has written for a number of magazines, guidebooks and online publications from around the world, including CNN Go, China Daily and Time Out Guides. Prior to her arrival in Buenos Aires six months ago, where she currently resides, she spent four years living and working in Shanghai, China. Her specialty subjects are fashion and shopping.
Sight(s) Featured in This Guide:
1

Women with a weakness for shoes will positively drool over the eye-catching creations of local shoe designer Lucila Iotti. The designer started her shoe line back in May 2007 because she couldn’t find a pair of heels that she liked in BA. Inspired by her mother’s love of fashion and her own love of color and disco lights, she creates women’s footwear in high quality leather, suede, satin and vinyl, including strappy sandals, stilettos shoes, ankle boots and shoe boots. Not afraid to make a statement, her unique designs are characterized by towering heels, edgy silhouettes and contrasting panels of bold colors and geometric patterns, enough to brighten the dullest of outfits.

Currently one of the coolest shoes designers on the Buenos Aires scene, Iotti caught the attention of Sex & the City stylist Patricia Field during the preparations for the first Sex and the City movie back in 2008. Although the shoes didn’t make it into the movie, they did get a mention in a promo trailer.

The designer is now trying to make a name for herself in the US and Europe in between meeting customers in her cosy little Palermo boutique and helping them to choose the perfect pair of heels.

First opened back in 1998 before Palermo was the trendy shopping district it is today, Juana de Arco is one of the oldest and kookiest boutiques on the block. Founded by local designer Mariana Cortés, the brand’s name translates as Joan of Arc, so-named after the many Juans in the designer’s family and the designer’s own personal identification with the strong, fighting spirit of the legendary heroine.

Inspired by the colors, customs and traditional dress of South America, Juana de Arco is a world of its own, unaffected by the latest trends. The boutique features women’s and children’s clothing, underwear and sleepwear, men’s boxers and a range of home accents. Each collection is built around a theme, often related to nature and animals, and the designs are characterized by traditional sewing and embroidery techniques and playful prints with a story to tell (all of which are designed in-house). Not surprisingly the label has a strong fan base in Japan and the designer has been known to reduce her fans to tears when she visits the Tokyo boutique.

Since 2001, the quirky design house has also been involved with a social project ‘Proyecto Nido’ (Project Nest) in which they recycle their fabric offcuts and use them to make Brazilian-style knotted rugs, available to buy in the boutique. The rugs are all handmade by a local community on the outskirts of the city.

Also look out for the artwork on sale by local contemporary artist Dani Vega.

A little further up the street, the boutique of Coragroppo is a stark contrast to the colourful world of Juana de Arco. Buenos Aires-born designer Cora Groppo takes on a more minimalist, understated aesthetic for her namesake women’s line and experiments with form, silhouette, folds and layering in a muted palette of black, white and grey. Her elegant prêt-a-porter collections feature fine, deconstructed knitwear, delicate, soft leather jackets and other sculptural separates in luxe fabrics designed for the modern, sophisticated woman.

You’ll also find a selection of stylish, ruched leather bags and some chunky resin bangles, rings and other accessories.

The seven-year-old fashion house is a regular at Buenos Aires Fashion Week and has also opened a boutique in Rome, Italy.
4

Designer Nadine Zlotogora’s homey, boho chic boutique is arguably one of the prettiest in town. Set across a series of small rooms in an old European-style house, the shop has a rustic, French feel.

First launched in 2000, Nadine Zlotogora’s highly coveted men’s, women’s and children’s collections carry a romantic, whimsical charm. The designer is known for experimenting with different layers of fabrics and contrasting textures and pays close attention to embroidery and other details, making for unique, one-off pieces.

The characterful, well-thought out boutique also carries an assortment of pretty objects for the home including rugs, embroidered cushions and pots of quirky patchwork fabric flowers and plants that add character to the space along with other rustic-style trappings.

In addition to Zlotogora’s own collections, the designer likes to support the work of upcoming artists and stocks select artwork and the leather shoes and bags of two other local designers.
5

If you’re unlucky enough to get caught in a storm in Buenos Aires, you’ll know that when it rains, it pours. Luckily local designer brand Seco has all you need to stay dry and brighten up your day. Previously working as an architect, Buenos Aires-born Veronica de Miero switched to fashion design back in 2003 after making some rain macs for her husband and friends. Her designs were an instant hit and she went on to produce a range of stylish rainwear for women, kids, and most recently men, including rain boots, reversible rain macs and capes and umbrellas. The items come in a range of funky styles and bright colors and prints, from classic boyish checks to polka dots and feminine florals. The prints and motifs are all the brand’s own designs.

The designer has also carried the weather theme over to a small line of casual basics including leggings, T-shirts, swimwear and canvas shoes.

The boutique is always buzzing with customers and is very popular with the fashion-conscious locals. Seco is also available to buy online.
6

Having trained at Amsterdam’s Gerrit Rietveld Academie in the 90s, local fashion designer Carola Besasso returned to Buenos Aires and decided to channel her newfound design skills and inspirations into a women’s clothing line, fittingly named ‘Dam.’ Following in the footsteps of Mariana Cortés and Juana de Arco, she set up shop in the arty district of Palermo back in 1999.

Besasso’s designs one-of-a-kind pieces typically made out of old vintage clothing and fabrics or other unusual materials that the designer comes across. Her 50s style dresses and skirts, quirky shirts, T-shirts and trousers put the fun in fashion and are all playfully embellished with buttons, appliqués and other handmade details. She also does a colourful range of underwear.

Although a string of commercial brands have since sprung up in the area, Dam remains true to its independent roots providing unique retro-style threads with a modern twist for women with an individual fashion sense. There’s also a small rail of women’s and men’s clothing from local designer friend Bandolairo.
7

If you haven’t already treated yourself to a nice Argentine leather bag or pair of shoes then this is the place to do it. Although the Ana Mezho boutique only opened in the Palermo neighbourhood in December 2009, the small-scale, family-run leather business spans two generations. Now run by sisters Gabriela and Erica, it was originally founded by their Armenian grandparents who named the business after the grandmother.

Since 2005, the sisters have been expanding and updating the collection to include stylish handbags, clutches and wallets and other pretty leather and suede accessories such as key rings, belts and hair bands. What sets it apart from other boutiques in the city is the sisters’ creative use of bright colors, tassels and contrasting strips of fabric making for funky, feminine designs.

All shoes and bags can be made to order and you can customize the colours and styles depending on the leather in stock.