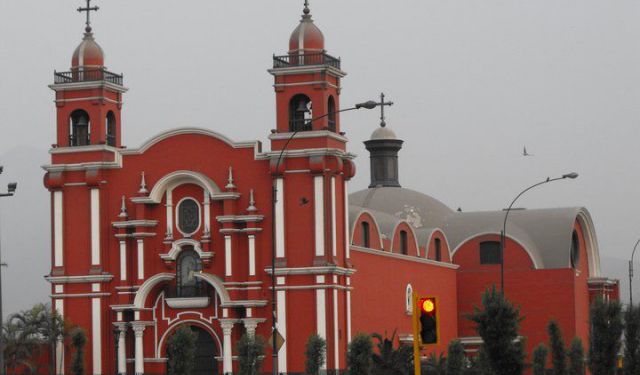 Most of the significant cathedrals of Lima are loosely scattered around the Plaza de Armas in the city center. A wealth of beautiful architecture and history - both inspirational and morbid - is to be found in these magnificent buildings. Most of these sites do not charge for admission - and the ones that do charge are quite reasonable.
This article is featured in the app "GPSmyCity: Walks in 1K+ Cities" on iTunes App Store and Google Play. You can download the app to your mobile device to read the article offline and create a self-guided walking tour to visit the attractions featured in this article. The app turns your mobile device into a personal tour guide and it works offline, so no data plan is needed when traveling abroad.

Create Your Own Self-Guided Walks in Lima
Guide Name: Churches of Central Lima
Guide Location: Peru » Lima
Guide Type: Self-guided Walking Tour (Article (A))
# of Attractions: 8
Tour Duration: 2.0 Hour(s)
Travel Distance: 3.2 Km or 2 Miles
Author: Jim Reynoldson
Author Bio: Jim Reynoldson is an avid traveler and writer who grew up in Oregon. He enjoys hiking, camping, and sight-seeing throughout the Pacific Northwest and beyond.
Sight(s) Featured in This Guide:
1

Originally constructed in 1555, Lima’s central cathedral has experienced damage from earthquakes in 1687 and 1746, with reconstruction projects following both times. As part of the reconstruction projects, La Catedral has grown in size – as its congregation size outgrew the structure itself. The remains of Francisco Pizarro rest in a chapel just inside of the main entrance. The cathedral’s elaborate façade has three huge doors, set with sculptures of the Apostles and the heart of Christ. Signs at the entrance commemorate a papal visit from Pope John Paul II in 1985 and 1988. Tours of the cathedral are available in English, and photography is permitted without flash.
Image by Victoria González Olaechea Yrigoyen under Creative Commons License.
2

This 17th-century baroque Franciscan cathedral and monastery located near the Plaza de Armas survived the earthquakes of 1687 and 1746 far better than the other cathedrals of Lima, although it sustained some damage during an earthquake in 1970. An especially macabre feature of this site is the underground catacombs, which feature oddly-arranged bones from about 70,000 bodies. A museum of religious art and artifacts is onsite, as well as a historic library containing books dating back to the conquistador era. A 45-minute guided tour is included with admission, with one hourly tour in English and more frequent tours in Spanish.
3

Opened by the Jesuits in 1638, this is among the smallest of the major cathedrals in Lima. Also less ornate on the façade than many other cathedrals, San Pedro is still a fine example of Lima’s colonial baroque architecture. Having taken about 200 years to complete the construction, the architecture is a hybrid of baroque styles, and often studied by students of architecture. The interior contains the ornate gilded altars of San Ignacio de Loyola and Santa Lucia, decorative tile work, Moorish-style carvings, and masterful paintings. During the colonial era, San Pedro was the cathedral attended by much of Lima’s aristocracy.
4

An incredibly ornate sculpted façade with twisted columns fronts this cathedral, built in 1539 by Fray Miguel de Orenes at the site of the first Mass in Lima on land donated by conquistador Captain Francisco de Becerra. Earthquakes destroyed the structure in 1687 and again in 1746, and a fire destroyed the interior in 1773 – with the cathedral being rebuilt after each event. The altar is a neoclassic style, depicting the Virgin of Mercy – adopted as the patroness of the Peruvian army in 1823. The granite used to build the façade came to Peru as ballast in a ship. Buried beneath the floor of the cathedral are the remains of Father Pedro Urraca, who devoted his life to the Order of Mercy - believing it miraculous that he survived a violent storm on his ship journey from Panama to Peru.
5

Originally built in 1573, this cathedral has an elaborate façade completed in 1710 and designed in the Spanish churrigueresque style. The Iglesia de San Augustin sustained damage during a number of earthquakes, in addition to damage from a military attack by the forces of Andres Avelino Caceres in his fight against Spain in 1895. The chapel includes elaborate choir stalls, coffered ceilings, a cloister with portals, paintings, and a sculpture called “La Muerte”, by Baltazar Gavilan. An example of Peruvian Baroque architecture, the cathedrals façade includes sculptures of a number of religious figures, including that of St. Augustine set atop the central entrance.
6

This cathedral and monastery was built in 1771 under the direction of Viceroy Amat, and is built upon the site of a settlement of freed Angolan slaves. Legend has it that one of the freed slaves painted a mural of Christ on a wall – and this wall was the only part of the original structure that survived a large 1655 earthquake intact. The cathedral was built around this wall, paying homage to the miracle of its survival. Starting as a small chapel, numerous reconstructions have increased the size. The mural of Christ – known as the Lord of Miracles – is the centerpiece of an important Catholic passion festival beginning on Oct. 18th of each year.
7

This church and sanctuary was built in 1670 next to the site where Saint Rose was born in 1586. Saint Rose – born Isabel Flores de Olivia to a wealthy family – was given the name at her confirmation in 1597 because a servant claimed to have witnessed her face transform into a rose as a baby. Entering a Dominican convent in 1602, Rose – who was reportedly very beautiful – cut her hair and even disfigured her own face in attempts to avoid vanity. Although she died at the age of 31, Rose spent her short life in service to the sick and the needy – and became the first Catholic from the Americas to be sainted in 1671.
8

This church and convent was built in 1540 and is one of the oldest cathedrals in Lima. The land on which is was built was donated by Francisco Pizarro to the Franciscan Friar Vincente Valverde (who accompanied Pizzaro during his conquest) for construction. The monastery contains important religious artwork – including tile mosaics commemorating the life of Santo Domingo de Guzman, who founded the Dominican order. Santo Domingo also contains the tombs of two significant saints: Saint Rose (who is depicted in an alabaster statue donated by Pope Clement in 1669) and Saint Martin de Porres (one of the few black saints in Catholic theology). To finish this tour, simply walk one block southeast to the Plaza de Armas.