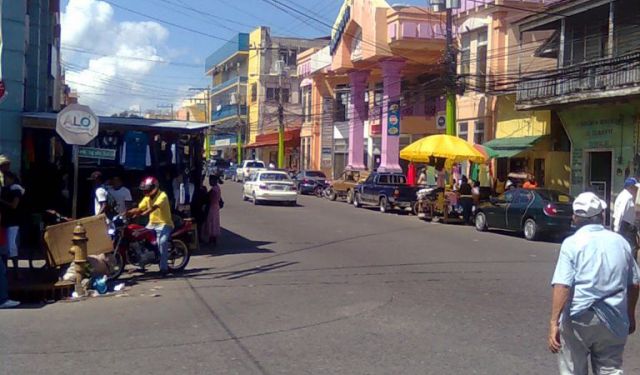 This tour includes a small but splendid cathedral, three major parks, one with museum-piece steam engine, an authentic open air market, a pleasant walk along one of the best
local beaches, an historic customs building and to finalize an ancient, now disused dock provides some splendid views
Image Courtesy of Wikimedia and Luigini.
This article is featured in the app "GPSmyCity: Walks in 1K+ Cities" on iTunes App Store and Google Play. You can download the app to your mobile device to read the article offline and create a self-guided walking tour to visit the attractions featured in this article. The app turns your mobile device into a personal tour guide and it works offline, so no data plan is needed when traveling abroad.

Although the site for this Roman Catholic cathedral was chosen and blessed in 1945 its construction did not begin until July 22, 1951 and was finished on June 22, 1952. It was

blessed as La Ceiba's official cathedral on 1st April 1953 and now makes for a striking landmark in the center of the city. It is open early in the mornings, when mass is held, but

not normally later on in the day. The cathedral is named after Saint Isidore the Laborer, a Spanish saint who is the patron saint of both farmers and also of La Ceiba itself.

The Central Park, which has been re-furbished in late 2011, has several statues of Honduran heroes which were created in the nineteen forties, including of Lempira, the Indian

warrior and Honduran hero who fought against the Spanish in the 16th Century, and of Francisco Morazan, the 19th Century Honduras born Central American general and

politician who governed during the brief early 19th Century Central American Republic. Many old trees provide a restful ambience and also shade from the harsh tropical sun, and

this is the best place in town to engage in some people watching.

Swinford Park, which is considered by many to be the most spectacular park in Honduras, was created by the Standard Fruit Company and named after one of their executives,

William Steele Swinford, and was inaugurated in 1999. It contains the preserved steam engine, San Jose, which was the first steam train from the times when trains used to run in

La Ceiba. There are also a number of carriages which were used to carry the workers to the bananas. The park also contains bronze sculptures including of an ostrich, an elephant

and a rhinoceros as well as a well-maintained garden with many examples of tropical plants.
4

The open air market provides some authentic Honduran culture, with its distinctive green wooden stalls, where the merchandise can be securely locked at night. A whole

range of goods and products, including fresh food, clothes and almost anything else you care to think of, are found here, and at prices that are the cheapest in the

city. This is where the locals shop. This market stretches along for a number of blocks of our walk.
5

Named after Manuel Bonilla, an early 20th Century President of Honduras who gained power after a bloody civil war and gave concessions to the USA fruit companies in and

around La Ceiba, Parque Bonilla has now become primarily a children's park where kids can come and play and let off steam with the various play equipments available while adults

can either look at or rest in the shade of the very pleasant pavilion building while also appreciating the view of the Iglesia de la Milagrosa, which was tha main Catholic church

in La Ceiba until the cathedral was inaugurated in 1953.
6

setting of the blue Caribbean sea. The walk here is relatively short and stretches for about half a kilometer but provides a welcome break from the city itself. The walk is also safer

dock, where the walk finishes, is also reassuring.
7

As you walk along the beach, and about two thirds of the way down, you can see the Aduana or old customs building, which was in use until the old dock finally closed in 1998.

The building was constructed in 1917, as you can see when you view it. The government donated the building to the Culture Society of La Ceiba in 2008 and plans are currently

afoot to turn this historic building, which has been sadly neglected in recent years and is currently abandoned, into a cultural center, marking its historical significance.
8

historical monument became defunct. It is now used by amateur fishermen and is also a tourist attraction with its splendid views of the Caribbean Sea. You may wish to walk out

on the dock though it is semi-rotten with many planks missing and so a certain care is required. About half of it fell into the sea one rough day a few years ago.