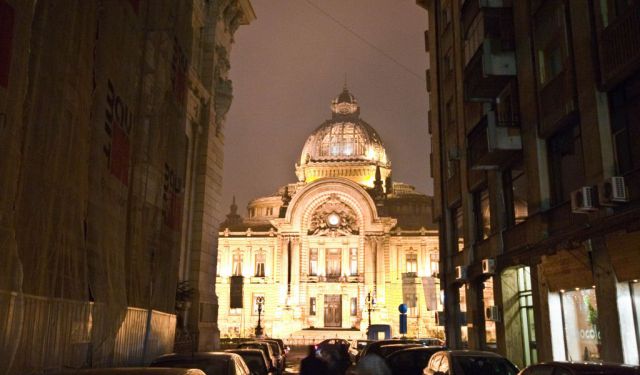 Also known as Little Paris, Bucharest once used to belong to the fabulous European capital circuit; its ‘golden age’ was at its highest level during the interwar period. Fragments of Bucharest’s bohemian past can still be spotted in some of the old buildings, parks, restaurants and cafes, many of them having been established during the Romanian version of la Belle Époque.
This article is featured in the app "GPSmyCity: Walks in 1K+ Cities" on iTunes App Store and Google Play. You can download the app to your mobile device to read the article offline and create a self-guided walking tour to visit the attractions featured in this article. The app turns your mobile device into a personal tour guide and it works offline, so no data plan is needed when traveling abroad.

The oldest operating hotel in the city, also housing a traditional restaurant, a wine cellar, several bars and a café, Manuc’s Inn was built in 1808 by a wealthy Armenian merchant, Emanuel Mârzaian, known to the people of the period by his Turkish name, Manuc. The picturesque, multi-balconied courtyard stood witness to many historical events, such as the signing of the treaty to end the Russo-Turkish war or many meetings of the great minds who united all three Romanian provinces in 1918. Its one hundred and twenty or so rooms served at first as shops, to later be transformed into city hall offices, apartments and even theater performance venues. The oak beam bridge in the yard is a nice example of what Bucharest streets might have looked like in the 17th century.

If you decide to stop for lunch here, don’t miss out on the delicious mutton pastrami.

This small nunnery was built by the Greek innkeeper Archimandrite Ioanichie in 1724, in the Brâncovenesc architectural style, within the precincts of the two-storey inn he had previously established. This style, very popular in Wallachia and Moldavia during the 18th century, is a synthesis of Renaissance and Byzantine architecture, remarkable for its arched exterior windows, Arabic floral patterns and curved lines. The small Orthodox convent Ioanichie founded was sustained financially by the inn, a common arrangement during the epoch – the inn vanished, but, somehow miraculously, the monastery survived.

Today it shelters a large collection of over 8000 books of theology, Byzantine music, arts and history as well as a great number of old (early 18th century) icons, ecclesiastical objects and parts of wall paintings recovered from churches demolished during the communist regime.

During almost every office you will be able to hear the Stavropoleos Byzantine Choir singing works by 19th century Romanian psalmodists.

Literally The Beer Wagon, Caru’ cu bere is one of the oldest beer halls in Bucharest; it was opened in 1879 and since then it has been brewing its own somewhat unremarkable beer and attracting every tourist in the area. Its lavish interior, its elegant façade, the murals, the stained glass, the silhouette of Old Ghiță (a legendary waiter), the loud chatter, the gypsy players, the folk dances and the unexceptional food – all these elements come together to try and recreate the exuberance of the place at the beginning of the 20th century. It’s of course up to you to decide whether they succeed or not.
4

This charming palace was never actually inhabited – CEC is an acronym for Casa de Economii și Consemnațiuni, which used to be a public savings institution, later to become the first Romanian bank. The building was erected in 1900 and it served its purpose until 2006, when it was sold to the municipality in order to be transformed into an art museum. This did not happen yet, so the building was let to its former owners and will remain a bank until a new suitable building is found.

The palace is famous for its eclectic architecture, its decorative coats of arms and its Renaissance-inspired metal dome, which you can visit during any week day.

This avenue was initially intended to be the Champs Elyseès of Bucharest. Its name translates to the Victorious Way and from certain angles it really does appear to be full of glory. This intersection here is one of them. The columned palace on your left is a building from 1912, home to the Cultural Institution of the Army – a somewhat honorary title, since the palace actually shelters a library, a restaurant with a terrace and 6 beautiful reception halls, each decorated with a different theme in mind (e.g. the Norwegian Hall, the Gothic Hall or the Byzantine one. ) To your right, the marvelous Hotel and Restaurant Capșa, a legendary place among the elite of the 30s and among the painters and poets of the Belle Époque – also famous for being one of the best confectioneries in town.

If you keep walking straight forward, you’ll stumble across the rebuilt façade of the old National Theatre (now Hotel Novotel) and, next to it, the Telephone Palace, an impressive art deco edifice, the first major modernist building on Calea Victoriei.
6

6) The Royal Palace and the Athenaeum

Probably the most impressive palace of them all, the National Museum of Art was destined to become the winter residence of the Hohenzollerns, the adoptive royal family of Romania, starting with the year 1906. Throughout the years it was harmed by fire, massively bombed and later caught in crossfire during the Romanian Revolution. On this occasion both the building and the collections suffered great losses. The international collection includes works by Old Masters (such as Domenico Veneziano, El Greco, Tintoretto, Jan van Eyck, Peter Paul Rubens and Rembrandt, plus some works by impressionist painters such as Claude Monet and Alfred Sisley). The national collection is quite noteworthy as well – especially the wing comprising the Expressionist ensemble. The palace is open daily until 6 p.m.

Facing the Art Museum is Bucharest’s most beloved concert hall, the Athenaeum. Opened in 1888, the domed, circular, neoclassical building is one of the most famous cultural symbols of Romania; since 2007, it is an European Heritage Label site.
7

The gardens' creation in 1847 was an important moment in the history of Bucharest – they would become the most popular meeting place in the city, as well as the birthplace of many love stories. The gardens form the oldest and the largest park in the city center. In the middle of the park there is a lake, which replaced a pool (a popular fishing site from as early as the 1600s) that was inhabited by mallard colonies. Today the mallards are back, and so are the little fairs and musical events held here almost every weekend. In winter the lake transforms into an ice rink, but during the warm season you can rent a boat (or a hydrobike, which is even more fun) and spend a romantic hour drifting on the water.

The park is full of magical landmarks and at almost every step you can run into one of them. The most popular are the Sissi Stefanidi Fountain, sculpted in memory of a grieving mother who had lost her daughter, the kiosk for the orchestra, home to hundreds of pigeons, the story-like Krețulescu Palace (nowadays the UNESCO headquarters) and the Writer’s Rotonda. ‘Cișmea’ means drinking fountain in Romanian (and Turkish) so the name of the park can be understood as ‘the drinking fountain keeper’s gardens.’
8

Behind you, a famous theatre, Bulandra, one of the oldest and most fashionable in Bucharest. In front of you, as well as to your left and right, everything you see belongs to the communist epoch and was not there at all before 1980. This is the most famous site of the Ceaușima, the so called program of systematization aiming to demolish vast portions of the central and historical parts of Bucharest and replace them with giant, uniform concrete buildings and high-density standardized apartment blocks. Of course, the word is a portmanteau of Ceaușescu and Hiroshima, referring to the fact that the dictator managed to tear down a huge part of Bucharest in the final decade of his regime and replace it with his own North Korean-inspired socialist architecture.

The Izvor Park used to be a huge open-space beer garden and is probably the only place which was left unharmed, although its landscape changed dramatically. Where the House of the People, (as the Parliament building is known to Romanians) and its huge garden stand today, a whole neighborhood called Uranus, full of elegant villas, an art deco stadium, public baths and casinos used to stand.

Even the river Dâmbovița had its course shifted in order to please the ruler. The massive construction site only spared a few landmarks, and its ruins were squatted by gypsies and dogs after the revolution. This is actually the reason why Bucharest has stray dogs in the first place – when people were forced to move out, many had no choice but to leave their dogs behind.
9

This red brick building is a self-contained cultural and culinary village; once upon a time it used to function as the main merchandise exchange market, but today it shelters a hip nightclub, an art gallery, advertising agencies, an Indian restaurant and, in summer, even an outdoor cinema. It’s a great place to stop for a coffee or a snack and then go explore the surrounding area, which is full of surprises (and sometimes also of pickpockets and dogs so please be careful).
10

If you decided on exploring, you will find that only 350 meters from The Ark (following Calea Rahovei) lies a wonderful palace (also known as the Collossus), currently the most chic party location in town. The palace has a formidable story: it used to belong to the man who built the Bragadiru breweries - if you look closely you will notice their ruins. It was actually built as a cultural and recreational center for the people in the beer industry. It has a couple of glamorous concert halls, as well as a beautiful yard and even a vintage bowling alley. Unfortunately the palace is not open to visitors, but you can always pretend that you want to rent it to throw a party and they will gladly show you around!
11

This is supposed to be a tiny piece of history brought to life, but is often nothing more than a tourist trap. Sometimes pushy waiters can be intimidating and the quality of the often-overpriced food (a common thing in Bucharest) is debatable, but they do serve truly traditional (and very fancy) food. The dark wooden furniture, woven rugs and stone walls covered with pictures of a Bucharest long gone also contribute to the realism of the act, as well as the overwhelming entertainment. Affluent locals and visitors book well in advance for a table, mostly because of the opera, ballroom dancing and dulcimer players, all of which can be quite charming if you like really long and loud dinners.

If pomp and lavishness fail to impress you, skip this one.
12

This is quite a legendary hill from both a historical and a religious perspective. Talking about perspective, from this place you would have had a wonderful one back in 1935; today the view is pretty decent too, especially on Easter night, when thousands of people, lit candles in hands, crowd up to listen to the midnight service. This is the hill where Romania actually became Romania under its first modern ruler, Alexander John Cuza, and it also serves as home to the main Orthodox figure of the nation, the Patriarch. The few buildings on the hill have their own special charm, as an ornate neoclassical palace stands right next to some modest-looking monk cells and a lovely bell-tower. A hundred years ago a sun clock incorporating a mid-day cannon was located on the hill; its exact position is unknown but it was in the vicinity of the bell-tower.

This is the perfect setting to end your tour of the old Bucharest, which hopefully was a pleasant one. And as you go down the hill, you will find yourself very close to your starting point, back in the 21st century.