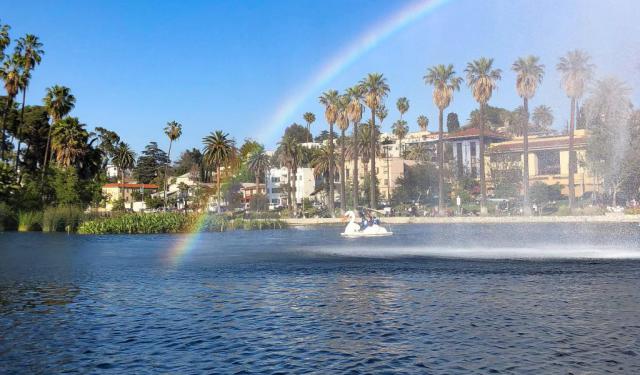 12 Things to Do With Kids in LA’s Silver Lake, Los Angeles, California (B)

LA, is Americas’s second largest city, encompassing over 500 square miles and home to just under four million people. Trying to “see it all” can seem overwhelming, but it doesn’t have to be. Not if you think of LA as what it really is, a city of neighborhoods, each with its own unique character and charm.

Whether you’re a local or just visiting I find the best way to see the City of Angels is to pick a specific area of town and focus on it. You’ll have to drive a few extra miles, Angelenos are famous for staying in their own neighborhoods, but you’ll get a whole day of exploration and fun for the price of a “little bit” of traffic! Feeling ambitious, pick two neighborhoods, we did!

For the second installment of our culture club we chose Echo Park and Silver Lake two of LA’s most hipster neighborhoods. We started in Silver Lake, which is also the more gentrified of the two. Echo Park is on the grittier side, but I really like that about it. Both are a treasure trove of one-of-a-kind shops, restaurants and hidden gems just waiting for you to discover them. ...... (follow the instructions below for accessing the rest of this article).
This article is featured in the app "GPSmyCity: Walks in 1K+ Cities" on iTunes App Store and Google Play. You can download the app to your mobile device to read the article offline and create a self-guided walking tour to visit the attractions featured in this article. The app turns your mobile device into a personal tour guide and it works offline, so no data plan is needed when traveling abroad.